Torben Partridge-Madson has always loved cycling, so doing prac with the best cycling team in the country was a fantastic experience.

It was his interest in cycling, and sport generally, particularly at the elite level, that enticed Torben into a career in Sport Science.

“I’ve been cycling since I was ten, I got into it with my dad, but I didn’t make it to the elite level. I really wanted to see how elite athletes do it – what separates them from the rest of us.”

This year he had the perfect opportunity to do just that when the Avanti Cycling team, one of the best teams in Oceania, spent time at the University of Tasmania sport science lab to undergo some testing.

We got to run the Avanti Cycling Team through a series of tests including neurological and strength testing, and we tested their endurance and capacity. It’s a great experience testing athletes, which is a key component of exercise science. 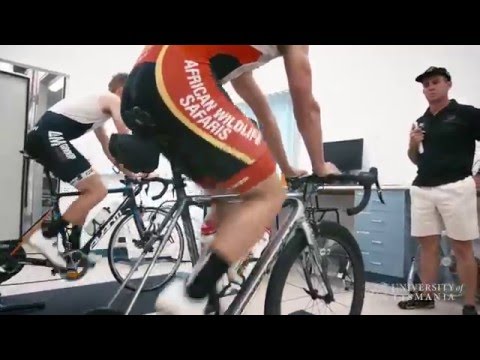 The Avanti Cyclists underwent, amongst other things, a five-minute ramp test where they did increasing workloads every five minutes until they couldn’t go on.

“It’s pretty interesting to see them pushing themselves as hard as they can and testing that ability. Seeing the best in Australia and getting an appreciation for just how good they are is amazing.”

Torben is keen to head into a career testing athletes and seeing just how good they can be.

Coach of a team like the Avanti Racing Team is a role that Torben wouldn’t mind doing in the future.

It’s pretty interesting working out what kind of training we can get these guys doing for them to do as well as they can. And also monitoring that progress throughout the season.

Torben has also been involved in studies with PhD students and researchers looking at cycling and rowers.

It’s been great to look at new things that haven’t been done yet and being involved in testing new concepts in exercise science.

“In our course we get to learn a lot of theory, so getting to put that theory into practice with elite athletes is a pretty special experience."

University of Tasmania Lions to make its sporting and research mark this week.

Graduates may also be able to pursue research in exercise science or to apply for postgraduate study in areas such as exercise physiology, physiotherapy, dietetics, rehabilitation, and medicine.

Charting the course for an adventurous career

Surveying and Spatial Sciences graduate and trail runner, Damon Whish-Wilson, combined his analytical and planning skills with a love of the outdoors.

The Diploma of Sustainable Living can see you study a diverse range of subject matter from bushfire science and gardening through to probability theory and journalism.

Could your ancestors' lives make a great historical novel?

Writer and historian Dr Naomi Parry introduces us to the writing units in the Diploma of Family History, and the work of Mandy Gwan.

When Esther Magor took part in Feed Your Mind, Feed the World camp in 2018, she took the first step toward a new career in agriculture.