A new census of what is believed to be the world’s rarest fish has identified that there are fewer than 100 adult Red handfish left on the planet, in the only two known surviving populations near Hobart, Tasmania.

Today those handfish will be introduced to the public through their own individual online profile pages.

Because each Red handfish can be identified by its unique markings, researchers and the general public will be able to see the appearance of each individual and when it has been spotted.

The new database, which catalogues all known individuals, will be invaluable for collecting the necessary information to investigate how long the fish live, how far individuals move, and how quickly they grow.

It also means that anyone worldwide can help to save the Red handfish by paying to name an individual or donating to the Handfish Conservation Project, which is undertaking vital research and conservation work for handfish.

IMAS researcher Dr Rick Stuart-Smith, who has been monitoring the Red handfish for the last 10 years, said this could be the last chance to save this species from extinction. 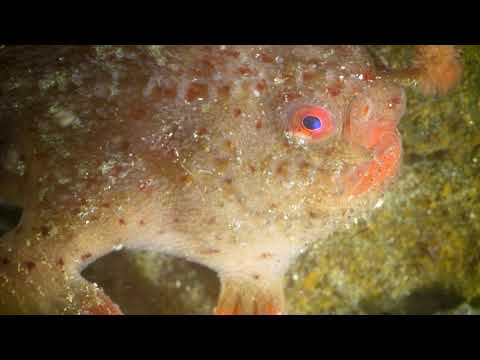 Naming a Red handfish is an exciting thing to be able to do, but it also has a serious side.

“The two remaining populations that we know of are incredibly vulnerable, and the fact there are so few individuals remaining means that without intervention they almost certainly face extinction.

“It is hoped that being able to name a Red handfish will help engage people on the plight of the species by highlighting just how critical population numbers are.

“At the moment we need to focus research on basic questions about their biology, find out whether there are any more undiscovered populations, do what we can to protect them from human-induced impacts, and actively manage their habitat.

The handfish are charismatic species and an icon of the Tasmanian marine environment, but unfortunately resources are currently limiting what we can do to save them.

“Everyone who finds out more about the Red handfish story in particular, seems genuinely interested and concerned, so we know the public don’t want to see them disappear. But that fate seems inevitable without intervention.”

Dr Stuart-Smith, who is a member the National Handfish Recovery Team working to save the species, said funds raised through the Handfish Conservation Project would build on other efforts to conserve the handfish.

“Government and research organisations such as the CSIRO and the NESP Marine Biodiversity Hub have been supporting important handfish research, particularly about the Spotted handfish, found on Hobart’s doorstep, and the best known of this endangered family.

“But limited Government budgets for threatened species conservation mean that saving the Red handfish will require private support, and we need industry, philanthropists and the public to help.

Every little bit can help, and can be done through the donations page, while those wanting to provide more substantial support have a chance to name one of the only known individuals for $1000.

To make a donation or name a Red handfish, please visit: www.handfish.org.au

Research Fellow with the Ecology and Biodiversity group in IMAS

Make change in a world defined by design.