Led by a team of researchers and students from the University of Tasmania, the Commonwealth Scientific and Industrial Research Organisation’s (CSIRO) RV Investigator sailed on a two-week voyage to discover long-hidden secrets of Tasmania’s separation from Antarctica, dating back to a continental breakup 40 million years ago.

The RV Investigator is CSIRO’s state-of-the-art marine research vessel, equipped with advanced mapping and marine exploration facilities. It also has the capability to dredge the sea floor, bringing up rock samples to be studied first-hand.

Dr Rebecca Carey, Senior Lecturer in Earth Sciences, was a Lead Scientist on the research voyage and supervisor of the 12-person science team.

“The three undergraduates who were involved in this voyage will all do research units or research summer programs based on the rocks that we’ve collected,” Dr Carey said.

They’ll have a nice passage from actually being on the ship, collecting the data, and understanding how it’s collected… and then writing and reporting on those research results. It’s a really valuable opportunity for undergraduates and postgraduates to get some ship-based experience. 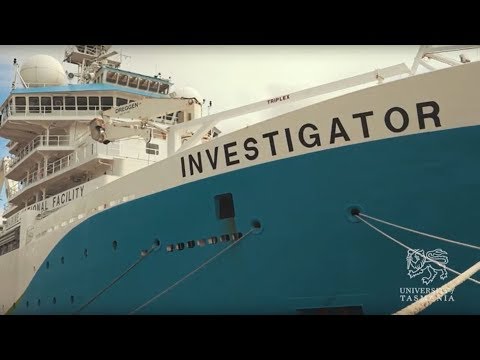 Stephanie is one of the three undergraduates who sailed aboard the RV Investigator and a student of the Bachelor of Marine and Antarctic Science with a passion for geology.

“It definitely gave me a lot more knowledge about submarine volcanoes and where they occur. This has literally been a crash course and I’ve learnt a lot in the last two weeks,” Stephanie said.

“I’d love to eventually get my PhD, and I’d love to be an academic focusing on submarine volcanoes.

It’s been a dream come true, this voyage. It really has. I’ve been wanting to do this since I was about 10.

The University of Tasmania provides Summer Research Scholarships every year, allowing undergraduate students to conduct supervised research for six to eight weeks over the summer period. Working alongside a supervisor, students gain valuable research experience as they complete their own research project.

This research was supported by a grant of sea time on RV Investigator from the CSIRO Marine National Facility.

An IMAS research trip aboard CSIRO's Investigator gives a rare glimpse of erupting volcano in the Southern Ocean.

Making a career in marketing

Silvy Yang chose the Master of Marketing Management to take her career to the next level.

Melanie Ransley is combining her love of teaching and carpentry.