After years of training, two very special Guardian dogs are ready to fulfil their mission to help bring the endangered Eastern Barred Bandicoot back from extinction in the wild.

In a collaborative research trial between Zoos Victoria and the University of Tasmania, 20 precious bandicoots have been released into a National Trust of Australia (Victoria) conservation reserve and are now under the protection of two of Zoos Victoria’s trained Guardian dogs.

A team of scientists and conservationists are tracking and monitoring the movements of both the bandicoots and the dogs as the canines actively seek to deter predatory foxes away from the site - a reserve near Skipton in Victoria’s western district.

“We’ve trained the dogs to leave the bandicoots alone, and instead bonded the dogs to protect a flock of sheep,” Mr Williams said.

“The dogs are not bonded directly to the bandicoots as they are solitary and nocturnal – so they do not flock. However, sheep do flock, and in the Skipton reserve the sheep can eat grass, bandicoots can live in the grassland, and all three species can share the same habitat.”

Helping to save a shy marsupial

However, further efforts are required to support the species’ long-term future. The Zoos Victoria Guardian Dog Project aims to reintroduce populations of the notoriously gentle and shy native marsupials back into the wild on mainland Victoria.

University of Tasmania ecologist Professor Chris Johnson and his former PhD student, Dr Linda von Bommel – an expert on the behaviour and management of Maremmas – worked with the Zoos Victoria team to develop the idea and played a key role monitoring the trial sites.

“The project is running as a large experiment – we are setting up Maremmas and sheep at several trial sites in Victoria, where we plan to release bandicoots,” Professor Johnson said.

“We have monitored these sites to measure changes in the distribution and behaviour of foxes, to test the extent to which foxes avoid areas occupied by Maremmas in comparison to control sites without Maremmas.

This information is crucial, as we would not release bandicoots unless we were confident the Maremmas were having the desired effect on foxes.

Population growth the aim of trial

Mr Williams said the research trial’s key measure of success will be the establishment of self-sustaining populations of bandicoots, first at Skipton and then at several other sites in western Victoria – including Dunkeld in 2021.

“As the bandicoots are going back into natural habitat on the mainland, some may not make it through the journey. However, the aim is that the presence of the dogs will alter the behaviour of the foxes, which will allow the Eastern Barred Bandicoots to thrive in that environment once again.” 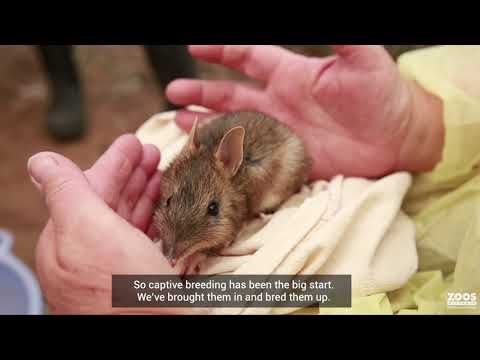 With a little help from some Guardian Dogs and sheep, these critically endangered Eastern Barred Bandicoots have a chance to get off the endangered list.

The conservation reserve at Skipton is equipped with 35 remote wildlife cameras and both Guardian dogs are fitted with GPS trackers. Additionally, all bandicoots are fitted with radio transmitters, weighing just 1.32 grams, that allow researchers to closely track their activity throughout the 50-hectare space.

The Zoos Victoria Guardian Dog Project is modelled on the successful Middle Island Maremma Project, where Maremma dogs are trained to protect penguins from foxes during breeding season. This is the first time that the method is being applied to an endangered marsupial and in an open landscape.

Professor Chris Johnson is an ecologist and conservation biologist, and an expert on mammals. His research investigates many problems that are relevant to the conservation of biodiversity, including the management of threatened and invasive species of wildlife.

You've got a friend in me

Can Maremma guardian dogs help save the endangered Eastern Barred Bandicoot from extinction?

Need an escape between classes? Here are our favourite hikes around each campus.

Defunct mine a site for environmental discovery