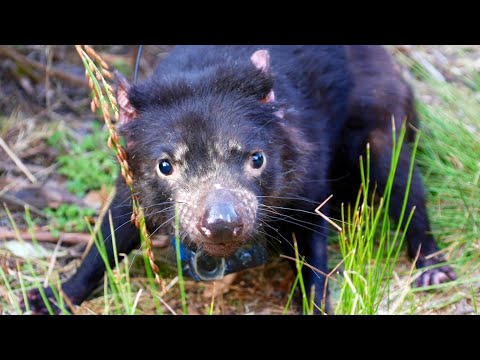 A ‘devil’s eye view’ into the secret lives of one of Tasmania’s most iconic creatures has been gathered by researchers using specially adapted video camera collars – and the results are incredible.

The never seen before footage gained through the use of lightweight video cameras to record movements around the clock was uncovered in a recently published study, carried out by University of Tasmania’s School of Natural Sciences researchers, giving a detailed insight into the social and foraging behaviour of Tasmanian devils in the State’s Arthur Pieman Conservation Area.

The video collars worn by the devils were created by adapting a commercial camera and produced around 144 hours of usable footage.

What do devils do when we aren’t watching?

- When devils are active, they run at a constant pace and rarely walk;

- Most scavenging occurs in natural vegetation, although devils also scavenge in pasture and along roads and hunt (to a much lesser extent) in both native vegetation and pasture;

- Most detailed social interactions take place when the devil is travelling, and three-quarters of these involve vocalisations only and a brief chase but no physical contact;

- Interactions at dens and around carcasses are much less frequent but also involve a low frequency of physical contact and biting.

The research, which captured many rarely seen moments - including spectacular footage of a devil feeding its young and gently prising a native hen’s egg open with its claws - gave detailed information about the way in which devils interact with one another, which will play an important role in their future survival.

“Video collars enabled us to record interactions between devils at locations, where other field methods haven’t been able to such as when the devil was traveling, which is where most of the interactions occurred. As DFTD is passed from devil to devil through biting, a better understanding of the frequency and location of biting episodes will help predict the spread of disease through a population.”

In the long run, the collars may also be of benefit to broader wildlife research, especially when combined with other tracking methods.

“Combining even small amounts of video collar footage with conventional field methods, such as direct observation, remote cameras, GPS collars and determining diet from scat collection, can provide a deeper understanding of ecological aspects, such as foraging, habitat selection and social interactions.

“Most ecological endeavours will benefit from the increased availability of animal-borne video collars, and the deeper insights they can provide on animal behaviour.”

The School of Natural Sciences is part of the University’s College of Sciences and Engineering.