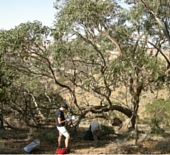 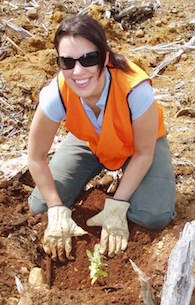 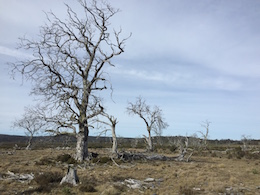 Description
Eucalyptus morrisbyi (Morrisby's gum) is a small tree endemic to Tasmania's southeast. It is one of Australia's most endangered eucalypts and one of the Australian Government's 30 priority threatened plant species under the Australian Threatened Species Recovery Strategy. It is one of only two eucalypts on this priority list. This species is facing extreme risk of extinction in the short-term without further emergency interventions. Key activities proposed for this project are:(UTAS involvement marked with an asterisk) 1.Monitoring of existing fenced areas for browser incursion (and relocation of possums) at the Calverts Hill stand will address the threat of vertebrate browsing 2.Establishment of a new fire break, a firefighting access track, management of existing fire breaks and fuel loads will address the threat of wild fire at Calverts Hill Nature Reserve 3.*Assisted migration (and seed collection to enable this migration) will address the threats that climate change poses by establishing four new populations in the species future climate range4.*Conservation plantings within the current climate range of the species will increase gene flow between remnants in Cremorne area and Calverts Hill to address the impact of fragmentation on this subpopulation.5.Monitoring of insect attack thresholds and associated insect control measures will address the threat of insect attack 6.Development of a weed management plan and associated control of serrated tussock will address the weed threat at Calverts Hill Nature Reserve 7.*To ensure coordinated recovery action across partners a recovery team will be established and will present the Conservation Action Plan for endorsement as the new Recovery Plan for the species.The UTAS component addresses points 3 and 4 above. We will determine the genetic diversity of the natural recruits at Calverts and generate spatial information on hotspots of diversity within the reserve. Additionally we will help Greening Australia establish experimental ex situ plantings of E. morrisbyi at four sites modelled by UTAS to be climatically suitable into the future. We will monitor the relative success of provenances of the species, as well as the overall success of the species in these new landscapes.
Funding
Department of Environment and Energy (Cwth) ($1,111,300)
Scheme
Grant-NLP2 Regional Land Partnerships
Administered By
Enviro-Dynamics Pty Ltd
Research Team
Wright M; Jones RC; Harrison P; Wiltshire RJE
Period
2019 - 2023 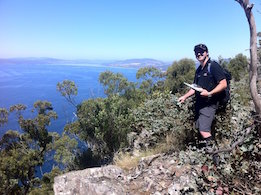