Rebe Taylor took on the role of Associate Professor of History at the College of Arts, Law and Education (CALE) in 2021, after a three-year CALE Senior Research Fellowship.

Rebe is an award-winning historian with more than twenty years of experience researching and writing the histories of southeast Australian Indigenous peoples and European settlement for academic and literary publications, web resources and museum spaces. Until early 2018, Rebe held the inaugural Coral Thomas Fellow at State Library NSW. She has also held numerous Fellowships including at The University of Melbourne and Kings College London.

Rebe's most recent book, Into the Heart of Tasmania, published by Melbourne University Press in 2017, won the 2018 Tasmanian Book Prize, the 2018 Queensland Premier’s Award for history, the inaugural Joan and Dick Family Green Award for Tasmanian History and was shortlisted for the Ernest Scott Prize for history. Rebe is currently working on The Women at the Edge of the World: Surviving Extinction (Black Inc., forthcoming, 2024).

Rebe graduated from The University of Melbourne with a Master of Arts in History in 1996 and wrote her first book, Unearthed: The Tasmanian Aborigines of Kangaroo Island (Wakefield Press, 2002, 2008) while completing her PhD at the Australian National University (awarded 2004). Unearthed won numerous prizes, including 2003 South Australian and Victorian Premiers’ Awards, and was shortlisted for the Ernest Scott Prize for history.

Rebe was awarded an ARC Discovery Fellowship DP0664448 From Race to the Genome: the Tasmanian Aboriginal People within the Scientific Imagination, 2006-2013, The University of Melbourne. In 2008, she took up the Foundation Fellowship at the Menzies Centre for Australian Studies, Kings College London, and in 2010 taught postcolonial and indigenous histories at The University of Melbourne.

Rebe's work as a historian goes beyond the academy, especially in the fields of digital and public history. This work collaborates and engages with Indigenous communities and across disciplines. Rebe is a co-creator of the award-winning web resource, Stories in Stone: an annotated history and guide to the collections and papers of Ernest Westlake (1855-1922), published in 2013 with the University of Oxford and the eScholarship Research Centre at The University of Melbourne where Rebe was an Honorary Fellow from 2016 to 2021.

Rebe’s research as Coral Thomas Fellow at State Library NSW from 2016-2018 investigated the life and collections of John Helder Wedge (1793-1872). This research resulted in an substantial essay in Meanjin magazine and will soon be published in a new web resource.

Rebe’s work in field of genocide studies and the histories of European imperial extinction discourse has resulted in articles in History CompassandThe Journal of Genocide Research.

Rebe Taylor has administrative experience in:

Through her career, Rebe has taught in Australian studies, Indigenous history and postcolonial histories. She has shared her experiences working in public, professional and digital history with students in various invited workshops and lectures and invitations. Rebe’s experience in communicating history includes presenting on television, radio, in public lectures, at writers’ festivals and writing for curated materials in museums and in scholar web resources. .

Rebe contributes to HTA380: History and Cultural Heritage. She looks forward to teaching into more subjects in 2022.

Rebe’s research focusses on the histories of colonisation, imperialism, genocide and the related discourses of Indigenous extinction, endurance and resurgence. She has a particular interest in the ways these histories are recorded and remembered in museum collections, archives and by Indigenous communities. Rebe has focussed on these questions within southeastern Australia, especially Tasmania, but she is increasingly interested in looking internationally at comparisons between Indigenous communities who have been deemed extinct by Imperialists, but who maintain that they have survived and who are revising and revitalising their cultures and languages. This new area of research extends Rebe’s contributions to the histories of science, colonial governance, genocide studies and memory studies.

Rebe has a collaborative and interdisciplinary approach to her research. She works with cultural informatics experts, librarians, archivists, and Indigenous community members to explore how digitised collections of cultural objects and historical records can be published in ways that are durable and discoverable, linked and annotated, transcribed, and imaged, and also respectful of Indigenous communities’ protocols.

A new book titled The Women at the Edge of the World: Surviving Extinction (Black Inc., forthcoming, 2024), a history of imperialist ideas about cultural extinction and the equally long account of Indigenous survival and revival.

Developing the aims of the School of Humanities’ research group, Writing Lives. 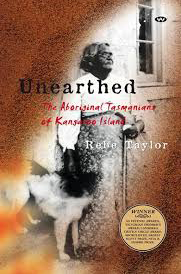 Rebe Taylor’s monographs. , Unearthed: The Tasmanian Aborigines of Kangaroo Island (Wakefield Press, 2002, 2008)  and Into the Heart of Tasmania, (Melbourne University Press, 2017) have been for contributing to the understanding of Australian history and the wider histories of European settler colonisation, science and of Indigenous societies.

Rebe has published articles in leading Australian journals including Australian Historical Studies, (Scimago Q1, H15) and in international journals such as Oceania (Scimago Q1, H21). Rebe’s article, ‘Genocide, Extinction and Aboriginal Self-determination in Tasmanian Historiography’ was noted as ‘excellent’ by A. Lester and F. Dussart in their book, Colonization and the Origins of Humanitarian Governance, Protecting Aborigines Across the Nineteenth-Century British Empire (Cambridge University Press, Cambridge, 2014). Rebe has a Google Scholar profile with 181 citations; h-index of 6; i10-index of 10.

Rebe’s publications cross disciplines. Her articles in the Aboriginal History journal on catching scale fish and making fire in Tasmanian Aboriginal communities have been commended for refuting definitively two major Australian archaeological debates (Robert Kenny, Lyndall Ryan). Her co-created web resource, Stories in Stone: an annotated history and guide to the collections and papers of Ernest Westlake (1855-1922) was noted by Stephen Weldon, Editor, Isis Bibliography of the History of Sciencefor setting a new trend in digital archiving and historical web resources.

ARC Discovery Fellowship [equiv. to current DECRA] DP0664448 From Race to the Genome: the Tasmanian Aboriginal People within the Scientific Imagination, 2006–2013, the University of Melbourne, $290,000

Outcomes within the tenure of the Fellowship: the award-winning web resource Stories in Stone, six articles published in highly ranked Australian and international journals, a commissioned book chapter and a second edition of a monograph.

The most significant Fellowship offered by the Library; awarded to outstanding mid-career scholars who can produce outcomes of high public impact..

Awarded as an outstanding scholar in the field of Australian studies: gives access to affiliated networks and research opportunities in Britain. .

Prestigious award for a work in progress in the fields of biography and life writing: recognises excellence in writing and the exploration of Australian culture, history and politics..

Rebe is new to UTAS. She will consider supervising postgraduate students in the areas of Australian and other social and cultural histories, Indigenous and colonial histories and museum and cultural studies.