Dr Gavin Daly is a Senior Lecturer in European History in the School of Humanities. He works in the fields of late eighteenth and early nineteenth-century British and French history.

Gavin completed a PhD on the history of Napoleonic France at the University of NSW before taking up a position as lecturer in Modern European History at Murdoch University, WA, between 1998-2002. Gavin joined the University of Tasmania in 2003.

Sieges, violence and the laws of war in the Napoleonic era. 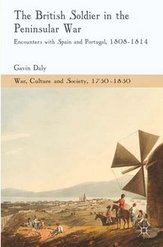 Gavin’s research has been published in monographs, edited collections, and in numerous leading journals, including English Historical Review, The Historical Journal, Historical Research, French History, and the Journal of British Studies.

His book The British Soldier in the Peninsular War: Encounters with Spain and Portugal, 1808-1814 (Palgrave Macmillan, 2013), was runner up for the 2013 Templer Medal, awarded annually by the British Society for Army Historical Research for the best book on the history of the British or Commonwealth armies.

His most recent book is Storm and Sack: British Sieges, Violence and the Laws of War in the Napoleonic Era, 1799–1815 (Cambridge University Press, forthcoming 2022).

Gavin welcomes expressions of interest from new MA or PhD students wishing to study in any of the following areas: Late eighteenth and early-nineteenth century British and French history, War in early modern and modern Europe.