Scientists have devised a new tool that can estimate commercial fish species to determine their sensitivity to climate change.

It is ready for use and is providing knowledge on different fish in a range of global oceanic "hotspots" including south-east Australia.

Australian scientists led by Associate Professor Gretta Pecl at the University of Tasmania's Institute for Marine and Antarctic Studies have put together the assessment and it has already been adapted and applied by Canadian and US authorities.

Associate Professor Pecl said hotspots – where temperatures are increasing much faster than the global average – have been identified in all oceans, including waters around India, Madagascar and South Africa in the Indian Ocean; Canada, Alaska and Japan in the Pacific Ocean; Brazil in the Atlantic Ocean; and elsewhere from polar to tropical regions.

These marine hotspots are becoming the world's new natural laboratories to assess and review climate change impacts on fisheries and the environment that supports them.

"Climate change-driven alterations in the distribution and abundance of marine species are being reported from all over the world, but particularly from these and other hotspots," Associate Professor Pecl said.

"Until now we have had limited capacity to quickly detect and predict these responses, even for comparatively well-studied commercial fish species. Because fisheries generate income, provide nutrition and support coastal communities, early warning of potential changes to fish stocks is very important and can provide managers and industries with the best opportunity to adapt to these changes."

The assessment, trialled for south-east Australia but applicable internationally, ranked 35 species on economic value, ecological importance and recreational significance. Priority species were profiled according to how the characteristics of each species would likely influence how their population responded to climate change in terms of distribution, abundance, or the timing of life-cycle events such as breeding.

"Our research now provides managers with a framework to assess the sensitivities of commercial species to climate change drivers," Associate Professor Pecl said.
The benefits go to fisheries managers in the first instance, who are informed about which species may need to be prioritised for further research, and to marine industries for help in identifying potential adaptation strategies.

Climate change-driven range extensions have already been documented in more than 45 fish species, and other animals such as octopus and sea snails, and there had been a southward colonisation of sea urchins in eastern Tasmania.

The rapid assessment has highlighted knowledge gaps for most species, including environmental tolerances of life stages.

This work is already being applied internationally, with a group of scientists from around the world using the new approach in a collaborative study in several southern-hemisphere countries, including Madagascar, where up to 90 per cent of residents depend on the marine environment for their livelihood and nutrition. This work is under the umbrella of the Belmont Forum, a group of the world's major and emerging funders of global environmental change research and international science councils. Associate Professor Pecl and her collaborators met in Brazil last month [March] to progress the study.

The south-east Australian aspect of the research, recently published in the journal Climatic Change, was co-authored by scientists at IMAS, and the South Australian Research and Development Institute, University of Adelaide and CSIRO, among other organisations. It was managed through the Fisheries Research and Development Corporation, with more than $200,000 in funding and in-kind support from State and Commonwealth marine resource management agencies. 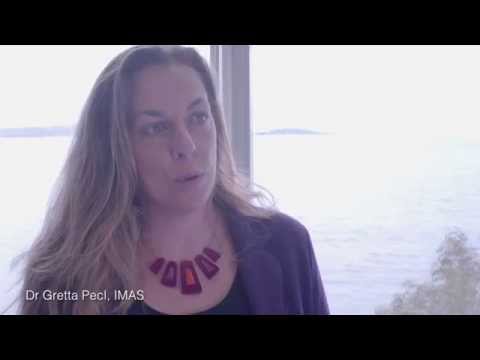 Australian scientists led by Associate Professor Gretta Pecl at the University of Tasmania’s Institute for Marine and Antarctic Studies have put together an assessment of commercial fish species and their sensitivity to climate change, already adapted and applied by Canadian and US authorities. Photo: Michael Rayner

More from this edition