Better known as the Gravity Recovery and Climate Experiment (GRACE) satellite mission, these "scales" are an integral part of the geodesy researcher's quest to reduce uncertainty about one of climate change science's key questions – how much do melting ice sheets contribute to the world's rising sea levels?

Using data from GRACE's carefully positioned satellites, Professor King and his team produce maps of the Earth's gravity field. Since gravity changes at a particular location when mass moves around, GRACE allows them to "weigh" changes in total mass, from the atmosphere to within the Earth.

"The wonderful thing about GRACE is she tells us what we really want to know: how much ice is leaving Antarctica and Greenland over and above what is arriving through snowfall," the University of Tasmania's Professor of Polar Geodesy said.

"All we have to do is subtract other changes (such as mass within the atmosphere, rock and oceans) from the scales and we can make a pretty accurate determination about how the ice sheets are affecting sea-level rise."

The science of geodesy deals with the measurement and representation of Earth. As an animated video on Professor King's website puts it: "Geodesy is the science of where things are, where they have been and where they are going."

In recognition of his geodesy achievements, Professor King will deliver this year's Kavli Medal and Award Lecture at the Royal Society in London on April 21. The award follows his research contributions to the first globally agreed estimate of melting ice sheets to rising sea levels.

The estimate, which reconciled a range of conflicting data, was agreed to by more than 40 of the world's leading scientists, who were brought together by NASA and the European Space Agency in 2012.

"To be honest, until then, the data was a bit of a mess," Professor King said. "In some cases there were estimates suggesting Antarctica was growing, and in other cases there were estimates suggesting it was shrinking. Our job brief was not to make things agree but to find out why there was so much disagreement in the data and then to work towards fixing those problems.

"These various estimates had been arrived at using three different techniques, and our project was the first time the techniques had all been studied sufficiently carefully to bring them back into agreement."

Professor King is an Australian Research Council Future Fellow and alumnus of the University. He completed his Bachelor of Surveying (First Class Honours) in 1997 and doctorate of geodesy/glaciology in 2002.

He works within the Surveying and Spatial Sciences group at the University, using geodetic tools such as the Global Positioning System (GPS) and GRACE to solve geophysics problems such as sea-level change, polar ice mass balance and deformation of the Earth. He is also working on ways to improve the accuracy and precision of these tools to maximise their information content and improve the reliability of interpretations.

Born and raised on the North-West Coast, Professor King admits he did not foresee a high-profile research career in polar geodesy when he started his undergraduate degree.

"It was something of a last-minute thing to go into surveying," he said. "I was interested in maths and physics and computers, but I didn't really know what to do. A friend came around for lunch one day and said I should take a look at surveying, so I did and thought it suited me.

"It wasn't until I was into my third and fourth years of study I started taking courses being taught by Professor Richard Coleman (now Deputy Director of the Institute for Marine and Antarctic Studies and Pro Vice-Chancellor [Research Collaborations & Infrastructure]) and I really started to become fascinated by the fact we can measure things very precisely over thousands of kilometres.

"It was Richard who said there was a project I could do for a PhD and it was on Antarctica, and it looked really interesting and seemed to fit what I was doing."

Professor King collaborates widely throughout the global community of geodesy and polar scientists. At the University of Tasmania, he works with Dr Christopher Watson, Senior Lecturer in Geodesy and Global Navigation Satellite Systems at the School of Land and Food, and Associate Professor Anya Reading, Senior Lecturer in Geophysics at the School of Physical Sciences.

He is proud to play a key role in the University's important and central contribution to Antarctic research.

For example, "weigh-ins" such as those conducted by Professor King reveal while Antarctica was losing about 69 billion tonnes of ice a year in 2006, or 190 million tonnes a day, it's 1.5 times higher now.

"The fact is our children's lives will be different because of rising sea levels. The beach will be different to the beach you and I visited when we were children, but it's not quite the same as the pain that will be suffered by the children in the Pacific islands or Bangladesh whose homes and livelihoods are going to be destroyed.

"Therefore, we must ensure we have the right information. We have these amazing measurement tools, such as GPS and GRACE, and they have given us the ability to measure changes much more perfectly.

"We can now go from the position of saying, 'We've got an idea about rising sea levels', to, 'We've got a much better idea', and I think that's the sort of transition that the world's public really want to know about.

"Because we can reduce uncertainty, then that actually provides something for governments and the public to think about and to plan for in the future … to make the best decisions possible." 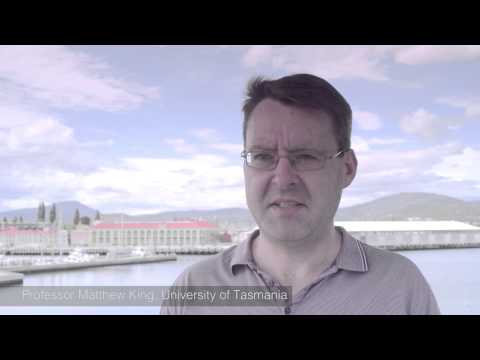 Professor Matt King can measure how much the polar ice sheets are melting. Photo: Peter Mathew

More from this edition