Tasmanian red meat producers are set to benefit from a new $1.5 million research project that aims to enhance the legume component of pastures, improving productivity and resilience.

The five-year project, led by Tasmanian Institute of Agriculture (TIA) Research Fellow, Dr Rowan Smith, will help grow productivity in the red meat industry by identifying and establishing perennial legume species that can successfully persist to fill feed gaps and improve tolerance and productivity under waterlogging.

The project will take a region-focused approach to improve the proportion of legumes in the high rainfall regions of the North West Coast and low-medium rainfall region of the Tasmanian Midlands.

Dr Smith said the current low proportion of legumes in Tasmania pastures were limiting the profitability and productivity of the Tasmanian red meat industry.

“The Tasmanian Midlands has seen recent transformational irrigation developments that have allowed the finishing of lambs in a traditionally wool and lamb sourcing region. However, only around 10 per cent of the area is irrigated and there is significant potential to improve the surrounding dryland grazing country to increase stocking rates,” Dr Smith said.

“Legumes are known for driving the animal production system by bringing in a quality aspect to the feed base.

“In low to medium rainfall environments there are fewer legume species options as many fail to establish and persist, so maintaining high legume content in dryland pastures can be a challenge for producers.

“By successfully establishing perennial legumes, producers can extend their growing seasons beyond what is currently being achieved and enhance the resilience of their feedbase to the changing and variable climate."

The project will trial different species and test how new sowing practices could advantage legumes during establishment.

“We will be looking at what techniques can help establish pastures with optimal legume content in order to improve the quality of pasture for longer into the growing season,” Dr Smith said.

“We will also be investigating how to effectively re-establish legumes in grass dominant pastures, potentially removing the need and risk of a full pasture renovation.”

The team will work closely with local red meat producers to ensure the findings are relevant and valuable.

“We will be working with farmers every step of the way to ground-truth what we are doing,” Dr Smith said.

“Things can be good in theory, but we want to make sure what we propose is economical and practical for farmers to implement.”

“I really noticed the issue 12-13 years ago when I started to look at the species mix in our pastures,” Mr Foster said.

“We really need this research to give us practical and cost-effective ways to re-establish the legumes.

“Increasing the legume component in our pastures will absolutely increase the productivity and profitability of our grazing business.”

The project is will begin this month, with spring sowings of experiments in the Midlands region.

The project is funded by Meat and Livestock Australia (MLA) and Tasmanian Institute of Agriculture (TIA) and is part of the Livestock Productivity Partnership.

TIA is a Joint Venture of the University of Tasmania and the Tasmanian Government. 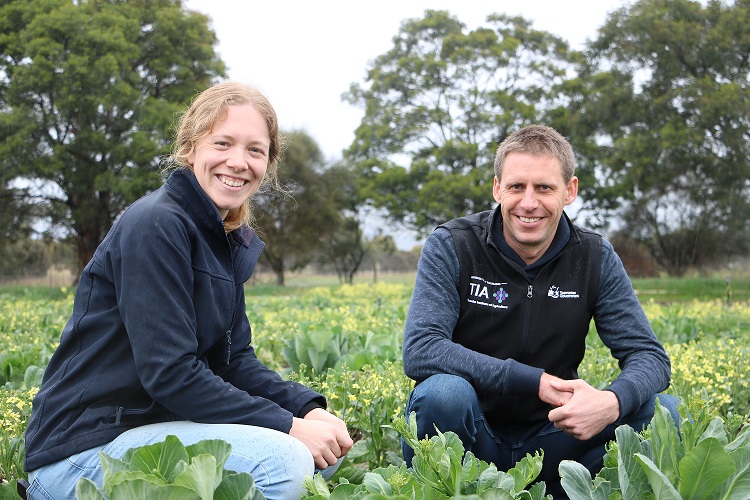