Ramping up legumes in dryland and irrigated pastures Both the application of herbicide - to reduce vigour of the grass component, without killing it - and cultivation of a thin band (via strip tillage) appears to have been most successful.

In terms of species, the vigour and productivity of red clover looks to have given it an edge in this scenario, at least in the early to mid-term, however, extended periods of moisture stress may limit persistence long-term.

The project is investigating sowing practices that advantage legumes during establishment more broadly and demonstrate how to establish legumes in full pasture renovations, as well as in existing grass dominant pastures. Sowing methods being evaluated include broadcast, direct drilling, and strip tillage.

This project aims to enhance the legume component of pastures and improve the productivity and resilience of the feed-base for Tasmanian red meat producers.

Currently the prevalence of perennial legumes in dryland pastures in Tasmania is low and is limiting profitability and productivity.

This project aims to increase the legume component in pastures from 12-15% to 20-25% and is taking a region-focused approach in the Tasmanian Midlands and North-West Coast.

In 2023, the Tasmanian Institute of Agriculture will be looking for expressions of interest from producers interested in participating in this second phase of the project. Learnings from the trial plots that have shown promise will be extended to 10 producer-led sites on-farm to trial alternative sowing techniques and species at a commercial scale.

The Tasmanian Institute of Agriculture (TIA) will be holding a Pasture Legumes & Irrigation Field Day on the November 23, at “Fosterville” near Campbell Town to showcase the critical role of legumes in dryland and irrigated pastures.

The field day will give Tasmanian livestock producers the opportunity to see the latest trial results and test out IrriPasture, a new irrigation tool that uses local weather data to enhance water budgets and irrigation scheduling decisions.

On the day, Rowan Smith will discuss the latest results of trials investigating the adaptation of several legume species and evaluating over-sowing methods.

This work, jointly funded by TIA and Meat and Livestock Australia (MLA), under the Livestock Productivity Partnership (LPP), has a focus on improving pasture legume establishment under dryland conditions and increasing the legume content of pastures more broadly.

The field day is being held at the property of Simon and Penny Foster, “Fosterville”. Simon is not only participating in the pasture legume trials with TIA, but also another project looking at climate adaptation, and will give an overview of the latest climate projections for his area and their implications.

Jason Lynch, from Pinion Advisory, will discuss irrigated legume options in mixed cropping/grazing systems and the recent advancement in management and productivity.

James Hills will cover irrigation scheduling and the IrriPasture app, which is a simple web-based tool that uses a dashboard, that is accessible on smart phones and tablets, to provide irrigation recommendations.

The field day will incorporate paddock walks to view the dryland legumes trials and the irrigated pasture legumes. It will also feature the University of Tasmania MILE Truck, which will provide producers the opportunity to set up IrriPasture for their farm on site on the day as well as to look in detail at nodulation in pasture legumes.

Please RSVP by the Thursday, November 18. Register your attendance here 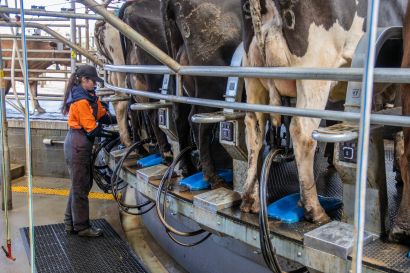