This article was published in the Summer 21/22 edition of PotatoLink magazine, brought to you by the fresh and processing potato levies.

Pink rot, caused by Phytophthora erythroseptica, is an important disease worldwide. It is found widely in Australia, particularly in Tasmania, and can cause devastating losses both before and after harvest. Even if symptoms are not severe, its presence increases harvesting costs, as diseased tubers must be culled before storage or transport.

Pink rot is a potato specialist, in that it does not grow readily on other hosts. Despite this, long crop rotations are necessary due to production of long lived oospores. These can persist in the soil for up to seven years (Figure 1). Volunteer potatoes, and other Solanaceous hosts, must be scrupulously removed in order to break the cycle of infection.

The pathogen spreads rapidly in warm, wet soils through the movement of swimming zoospores. Improving drainage and soil structure to reduce the potential for waterlogging is therefore an important control strategy.

The fungicides Metalaxyl, Metalaxyl-M and Amisulbrom are currently registered for control (check for your region, use according to instructions), but there are concerns regarding possible resistance.

In 2009, American research1 indicated that calcium nutrition was important in suppressing the disease, with significant reductions in pink rot as plant calcium content increased.

The same team also determined that low pH amplified disease development, with an almost linear increase in the pathogen population between pH 5 and pH 82 . However, these trials were done using a hydroponic system, so it was unclear if these effects would be repeated under field conditions.

As a result, the potato industry together with Hort Innovation, have funded a project to examine these potential management strategies under Australian field conditions.

Dr Robert Tegg from the University of Tasmania is a research plant pathologist working on pink rot of potatoes. He is currently examining this issue through the project “Investigating soil pH and nutrition as possible factors influencing pink rot in potatoes (PT19000).”

The first year of trials are now complete. Eleven different sites were studied across four distinct regions: Sisters Creek, Devonport, Scottsdale and Epping forest. Six of the field sites included specific field trials with research strips of calcium amendments (Nanocal and/ or Calciprill/OzCal). These were either pre-spread, applied in-furrow or surface sprayed.

Individual growers, as well as field officers, helped select and set up the trial sites. Soil chemistry, pathogen levels, soil quality and disease outcomes were measured as were the relationships between these factors.

The objective was to assess whether the addition of calcium treatments impacted pink rot disease development and to also identify whether high levels of pink rot pathogen in the soil translated into increased disease in the crop.

SO, WHAT ARE THE RESULTS SO FAR?

Seven of the 11 sites suffered significant pink rot, with disease most severe in the NE regions. Unfortunately, according to Dr Tegg, “Calcium amendments failed to prove a silver bullet for control of pink rot, as benefits were negligible. However, there may be other benefits from increasing calcium”. These could include tuber quality and pest resistance more generally.

The researchers did, however, find that soil quality and topsoil depth were good indicators of where pink rot was likely to appear within a paddock. Areas which were compacted, had thin topsoil or poor soil health were the most likely to suffer disease.

Similarly, other damage within the field, such as wind damage or stem canker, also increased the likelihood of pink rot. This makes sense, because if plants are stressed due to other factors, the opportunistic pink rot pathogen is more easily able to break through the plant defences and cause infection.

Another interesting discovery was that many of the cropping soils studied were highly acidic. Moreover, pH dropped by up to 0.6 units during the growing season, putting them into the sub-optimal pH 5 to 5.5 range.

“The PreDicta Pt test also provided some insights into the way the pink rot pathogen survives and proliferates in the soil” commented Dr Tegg.

“Detection usually occurred mid-way through the growing season. Detecting the pathogen before planting was more difficult, probably due to its’ sporadic distribution around the field as well as significant temperature and weather effects on the soil population”.

Some complementary pot trials are currently underway. So far, these indicate that very high levels of calcium (>10 tonne/ha OzCal) are required to reach the efficacious levels recommended in the US studies (>7 – 7.5). Such high rates may not be practical commercially, particularly for red ferrosols. These soils are highly buffered, making it difficult to significantly modify pH.

The field work will also be repeated this coming season, with the aim of gaining a fuller understanding of factors that increase – or decrease – field incidence of pink rot.

For more information on the project please contact Dr Robert Tegg at robert.tegg@utas.edu.au Investing in employees pays off for horticulture industry Gaining a formal skillset in the horticulture industry 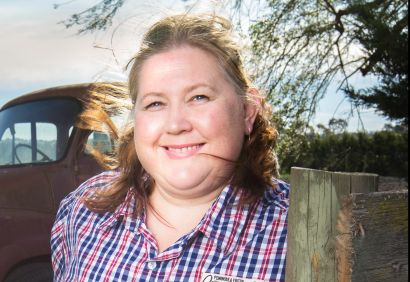