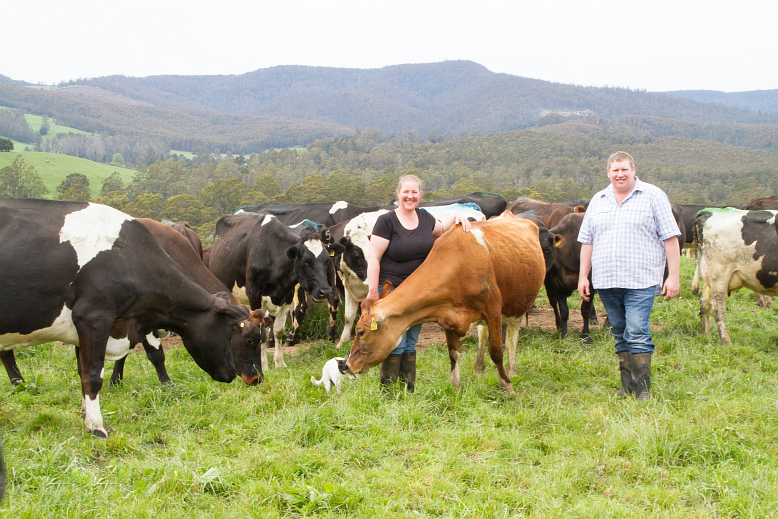 An “experiment” with sexed semen three years ago ignited one Tasmanian dairy farming family’s passion for breeding. And the decision has laid-down a foundation for the business’s future.

Stuart and Kylie Nailer milk 215 cows at Ringarooma in Tasmania’s north east with children Sophie 14, Kaiden 13, McKenzie 11 and Oaklea 8. Since 2014 the family have recorded a 425 per cent rise in the balanced performance index (BPI) rating of their herd- a measure of profit. It now sits at about $105. This rise follows initial significant BPI gains from $-40 to $20 when Stuart and Kylie moved from Queensland and initially purchased the dairy farm six years ago in partnership with Stuart’s parents.

The sexed semen result three years ago provided a boost for the family in what was otherwise a tough year with the farmgate milk price cut and drought.

“That year we did the experiment with the sexed semen, it was a really good result,” Stuart said.

From this joining, the couple decided to focus on breeding Friesians – rather than the Jersey-Friesian and three-way cross which they had been breeding. Stuart and Kylie both believe there’s more opportunity for gains with Friesians breed have made the most of tools such as genomics and corrective mating in recent years. They “ramped-up” their use of sexed semen across both heifers and cows and this coming year they have a bold plan to sell no bobby calves. Instead, they believe the sexed semen would deliver replacements with an Angus mop-up providing calves for the local F1-market. Last year they joined with two sexed semen sires, one delivered a 72 per cent in-calf-rate and the other 55 per cent. But using sexed semen for the first time wasn’t the Nailer’s first foray into changing breeding at their farm.

The couple’s first priority when they took-over the property was to tighten the seasonal calving. It was initially spread across four months and they now have it back to August and September, following three weeks of artificial insemination (AI).

“We had to take a whack to tighten-it,” Stuart said.

“We had an empty rate of about 20 per cent for two years, but then it tightened-up. It was then, we woke up to the fact we needed higher fertility bulls and bulls with high daughter fertility. It was then we used a bull called Christmas and got some really good results.”

Stuart and Kylie use the Good Bulls App to make breeding decisions. Calving ease and daughter fertility were “paramount” choosing sires with a reliability of at least 70 per cent. BPI has also been a focus as well. Stuart said the Good Bulls Guide made decision-making easier, by narrowing-down bulls which suit their breeding focus.

“We don’t get caught-up in the nice pictures (of bulls) or anything like that,” he said.

Genomic testing has started to play a larger role in the Nailers’ decision-making.

“For us, we now have numbers to play with and hope to eliminate the bottom 20 per cent (through genomic testing) through culling early and before we spend money on them for rearing,” Stuart said.

They would like to sell these calves to local farmers as replacements and this money would go towards paying for genomic testing.

Stuart shares AI duties with a contractor, but in the past few years due to the use of sexed semen this cost has escalated from $2000 to $8000. The couple said this cost rise was something they were prepared to wear as they anticipate fully capturing the value of better breeding in coming years.

Changes have also been made across the entire farming system. Ten per cent of the farm undergoes pasture renovation each season, initially planted out for a summer crop and then back into perennial ryegrass. This crop- which includes pasja and millet this year- provides feed for the warmer months on top of  60ha of irrigation. The farm is about 82ha, with some agistment used. The herd is fed about 1.8 tonne/cow/lactation in the bail. Production has lifted from a herd total of 75,000 kilogram of milk solids three years ago, to 96,000kg/MS last year and the herd is on-track for 105,000kg/MS this season. During this time the total herd has increased by 30 cows but production per cow has lifted 40kg/MS. Average production is now 500kgMS/cow and the cow’s weight about 550kg.

Starting a career in dairy was something Kylie Nailer had never considered. Her husband, on the other hand, had completed a dairy apprenticeship in Tasmania, after school, before moving to Queensland where he worked at a power station. Stuart’s parents where farmers in north east Tasmania, but Kylie was a Queensland girl and had never milked a cow before venturing down south.

“I didn’t know anything about it, I had never milked a cow, but then Stuart had an accident (got kicked in the calf) and from there it was a natural progression for me and I’ve become more involved as time goes on. For me, especially the last two years, the progress with the cows themselves has kept the passion there when the price certainly hasn’t been there.”

The Nailers currently service a local market for F1- calves and hope to continue this to make the most out of every animal on farm.

“Our goals are to maximise every calf that’s born,” Stuart said.

“Our attitude would be that if we have a good 60 replacement heifers, they are the ones that get sexed semen and the best cows. Everything else gets – if possible, F1 beef sires to maximise the calf value. That’s our ultimate goal in the back of our minds for two-to-three years’ time.” 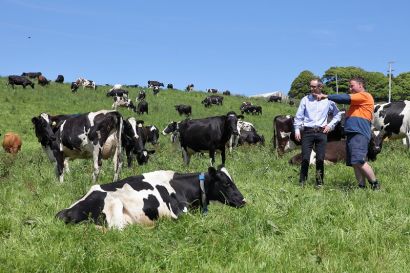