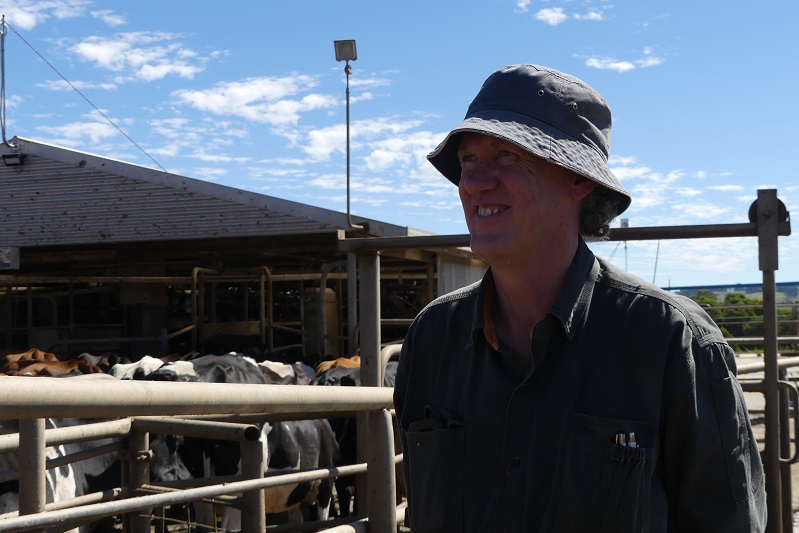 If you have been working in the Tasmanian dairy industry over the past 25 years, you have most likely met, or at least heard of, Mark Freeman.

Mark is probably best known for his role as the manager of the TIA Dairy Research Facility (then called Elliott Research and Demonstration Station) which he held for 11 years. In the middle of this year, Mark Freeman retired from his research position in the TIA Dairy, Grains and Grazing Centre. Mark has made a significant contribution to the Tasmanian dairy industry, in part because of the practical problem-solving skills he developed throughout his life.

Mark grew-up on a dairy farm on the north-west coast. He studied Zoology at University and then worked in mineral exploration on Tasmania’s west coast for nearly 10 years. He then took a job as a truck driver tour guide in Africa. This involved driving a truck with groups of tourists as they explored many different African countries. After doing this for 3 years, Mark returned to Tasmania where he again cut tracks through the Tasmanian bush to enable mineral exploration. It was while he was doing this job he saw an advertisement for a dairy researcher at Elliott Research Station. He applied and was successful in getting the position and began working for the Department of Primary Industries in July 1991.

Mark’s first research project involved investigating the role heifer liveweight made to life-time milk production. He worked with farmers around the state to weigh their heifers and monitor their milk production once they had calved and joined the milking herd. This work determined the importance of achieving target heifer liveweights in obtaining good per cow milk production. The research alarmingly also highlighted the high percentage of heifers that were culled prior to their second lactation. The information from this research has been used to assist both local and national dairy farmers improve heifer growth and is still being used today in extension programs such as Rearing Healthy Calves and Heifers on Target.

Mark became an expert on irrigation management through his research into irrigation scheduling. This research highlighted the significant cost of starting irrigation too late. An extension program was developed based on the research which included field days, a booklet called “Getting it Right” and a video – high tech for those days! Mark believes this research had the biggest impact of all the research he was involved in, as it showed farmers how to save a lot of money through monitoring soil moisture.

A long-term lime trial had also been established across the state. Mark worked on this project to help determine the appropriate rate of lime to apply, whether there was a long-lasting effect of lime and did it boost pasture growth. The research determined lime needed to be applied at a rate of 2.5 to 7.5 tonne per hectare if soil pH was below 6 and one tonne would increase by pH by 0.1 units (does vary a bit by soil type).

Mark continued working for the Department of Primary Industries and was involved in conducting farmlet studies at the research farm. These farmlet studies divided the dairy herd typically into four to five herds to undertake farm system level comparison studies such as the impact of different levels of grain feeding on pasture consumption, milk production and farm profit.

In 2007, the state government merged their dairy development and extension team with the Tasmanian Institute of Agricultural Research to become the now Tasmanian Institute of Agriculture (TIA). Following this change, Mark joined the dairy research team within TIA and managed the project he says he enjoyed the most from his dairy research career – red wheat vs white wheat. This project aimed to determine if there were milk production differences due to feeding red wheat or white wheat.

After working a quarter of a century in the dairy industry, Mark says he has seen some significant changes – particularly around herd size. When he first started working as a researcher, a large herd was 200 cows where now herds of 1000 cows are not unusual. This has had a flow on effect of more farms employing staff. He has also noted more irrigation is now used, there is a much greater awareness of animal welfare and in recent years there has been an increase in the number of boutique dairy products as well as corporate farms in the state. One thing stays the same though “farmers still work hard.”

“A highlight of my career in the dairy industry has been working with a team of people who genuinely care about the industry. Over the years it has been my privilege to work with committed people who work many more hours than they are paid for because they care about ‘our’ dairy farmers and want to make a difference in our dairy farming community. It has also been a pleasure working with so many positive dairy farmers over the years. Thank you all for your support.”

A personal note from Lesley Irvine

I have worked with Mark for the past 20 years and he has been an awesome mentor and friend. When I was first employed as a dairy extension officer, I was based at the research farm and Mark taught me much of what I know about dairy farming. As my team leader, Mark gave me a lot of opportunities and support which I am extremely grateful for. I particularly appreciate working with him on calf rearing projects. This is something we both loved doing and it was fun working together developing and conducting the projects. I learnt a huge amount about calf rearing from Mark over the years.

Mark always led by example. The motto of “don’t ask your team to do anything you won’t do yourself” is something he lives by. From cleaning out blocked calf shed drains (in my opinion THE WORST THING EVER) to dealing with difficult people/situations, Mark always took on the most challenging jobs himself. He was also a great example of strong work ethic. From tractor work at silage time, irrigation issues that needed to be dealt with through to taking blood samples from cows 7 days a week for research projects, Mark worked hundreds of unpaid hours because he cared about what he was doing. He continues to do this in retirement, helping with proofing and editing articles for this newsletter and continuing to provide support to students in their research projects. His knowledge, problem-solving ability and skills will be greatly missed from our team. What is your attitude?