At the most recent round of on-farm Dairy HIGH discussion groups, herd testing was one of the key discussion points.

The long-term financial advantages of herd-testing were highlighted in talks by Jo De Moel of the Herd Improvement Co-Operative (HICO) Victoria and Sophie Tilley of TasHerd.

The advantages of the non-invasive milk pregnancy testing were discussed by Ian Lewis, MVSC, PhD (Pacific Biotech/TasHerd). For 15 years, Ian has been involved in researching, developing and marketing non-invasive pregnancy diagnosis using hormones and proteins found in the milk of dairy cattle.

The test measures the concentration of pregnancy associated glycoproteins (PAGs) in milk. The protein can only come from a pregnant cow’s placenta and is released into the cow’s blood stream as pregnancy progresses. 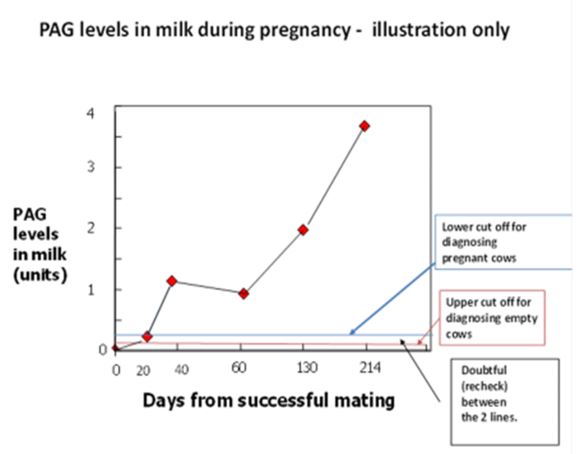 Ian discussed how PregCheck30 is reliable and accurate when key requirements are followed:

The prime consideration for any method of pregnancy testing is “accuracy” and PregCheck30 has proved itself to be more than 97% accurate at detecting both pregnant and empty cows that are at least 30 days post-mating. Over 50,000 PregCheck30’s have now been conducted on individual cows since 2014, and with very few exceptions, farmers have reported very high (97% plus) accuracy rates.

It is important to recognise about 5% or more of cows that are diagnosed pregnant between 30 and 70 days will slip their calves. This happens naturally, whether or not the cows are pregnancy tested. This figure is much higher in American dairy herds, mainly because of higher levels of grain inputs.

After 70 days of pregnancy the chance of calf losses reduce to 2% or less. Therefore, it is important to recheck cows 70 days after their last mating in case they have slipped their calf.

Ian highlighted the benefits of using PregCheck30 for pregnancy testing as:

One of the challenges of using PregCheck30 as opposed to manual pregnancy testing is determining the date of conception. To be able to do this using PregCheck30, good record keeping is essential along with strategic timing of the tests. See below for timing suggested by PregCheck30.

PregCheck30 1. Mid-December. This will pick up all cows pregnant to AI. May also pick up a few bull pregnancies.

PregCheck30 2. Mid-January (2 months after bulls are put in with the herd). This will pick up cows pregnant in the first month of the bull mating period.

PregCheck30 3. Final PregCheck30 is conducted 60 days after bulls come out. This will detect cows pregnant to the final few weeks of bull mating pick up those cows that have slipped their calf after being tested positive earlier in their pregnancy.

Pregnancy testing to determine accurate calving date is a highly recommended industry practice that has a lot of on-farm benefits. The method of pregnancy testing used is an individual farm decision and will be based on many factors including accuracy, cost and fit with the farm system and decision-making needs. More information about pregnancy testing through milk tests can be obtained by contacting TasHerd. Other pregnancy testing options can be discussed with your local vet.