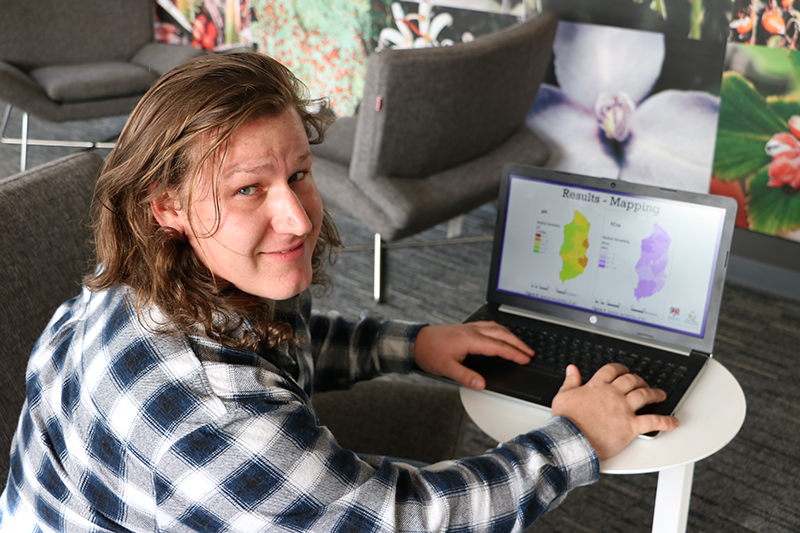 King Island beef is already among the best in the world, but a recent grad is looking into ways to bolster the brand to new highs by starting down low.

Not all soils are created equal. The more packed with micronutrients your soil, the better the grass. And when your grass is better, your livestock are healthier, happier and more productive.

When he started digging around in the dirt beneath King Island, University of Tasmania Agricultural Science grad Max Weidenbach created detailed nutrient maps. This was the first time any extensive nutrient work had been done on the island since 1932.

Mr Weidenbach’s maps revealed that animals—and producers—could benefit even more by building up micronutrients like cobalt, copper and manganese in the island’s soil.

“More micronutrients can give animals more energy and even make them more fertile.

“Our aim was to get really good coverage of the whole island, so we could give the producers a clear picture of what is going on in the soil.”

Mr Weidenbach spent eight days collecting soil samples on King Island, followed by another four months of preparation and analysis. He then worked with staff in the Department of Primary Industries, Parks, Water and Environment (DPIPWE) and the spatial sciences discipline at the University of Tasmania to create detailed visual maps.

“The maps can be used to help farmers make decisions about whether additional soil testing could be beneficial in a particular area,” said Mr Weidenbach.

“They are an indicative tool, but there is lots of potential to be able to take it further and fill in the gaps with more soil samples and pasture sampling.”

Mr Weidenbach said he was thankful for the support from the King Island community.

“Going to King Island was great. Everyone was welcoming, and I got a lot of good feedback.

“I am really grateful to the farmers who allowed me come out and sample their properties. I really hope my project can be used as a platform for more work to do be done in the future.”

Mr Weidenbach is now up for a major award for his work as the Tasmanian finalist in the AG Institute Australia’s 2019 National Student Awards.

He will present his research next week when he competes for the prestigious AEV Richardson Memorial Award.

The competition will take place at Entally Lodge in Hadspen, Tasmania on Thursday 18 April.

My Step Mum’s a Cow Surviving climate change in the field