With winter now behind us, we are once again seeing the effects of soil erosion from the North-West Coast hinterland visible in Bass Strait and farm dams. Wet weather at this time of the year is a normal part of our climate and preparing for it should be a standard part of farming practice.

Soil Researchers, Bill Cotching and John McPhee from the Tasmanian Institute of Agriculture (TIA), said planning to minimise soil erosion needs to start in late summer and autumn, instead of waiting until the rain starts.

“The reasons for soil erosion are usually fairly obvious – bare paddocks, saturated soil, steep slopes and heavy or frequent rainfall greater than the capacity of the soil to absorb it,” Mr McPhee said.

“Some areas along the North-West Coast experienced higher than normal rainfall, but the past few months have not been much higher than the long-term average. There shouldn’t be any excuses as processes and technologies are available to help farm managers prevent soil erosion.”

Dr Cotching said strategies to reduce the risk and severity of soil erosion were well known and have been used successfully by many farm managers. However, he said there was still a long way to go to achieve wider option of these methods.

“Farm managers use strategies to reduce soil erosion, have used them, or may no longer be using them for whatever reason, but something like the rip mulcher has been around for many years. There is really no reason for it not to be more widely used,” he said.

“Cover crops are another important tool in preventing soil erosion. Living cover crops are best, but if managing the growth is an issue coming into cropping season, spray them off early. A dead mulch cover on the soil is far better than no cover at all.”

“It’s not only soil that is lost during erosion, it's also hundreds of dollars per hectare in lost nutrients and those nutrients are never coming back,” Mr McPhee said.

“The causes and effects are not confined to paddock or farm boundaries. A farm plan allows integration of soil erosion control measures into the farming system, and can accommodate off-site influences,” he said.

“For those cropping steeper land, it is essential to install soil erosion control measures. Minimisation and control of surface water are key elements in preventing soil erosion.”

Farmers can follow these steps to reduce soil erosion: 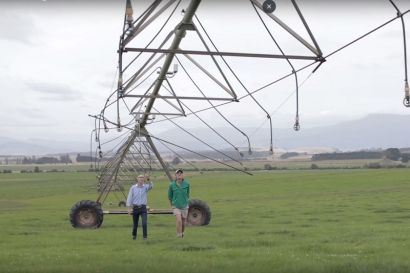