Researchers at the Tasmania Institute of Agriculture (TIA) are continuing long-term research into disease management for the state’s pyrethrum industry, looking at opportunities to help growers reduce input costs and increase productivity.

Drs Jason Scott and Tamieka Pearce, based at TIA’s Cradle Coast Campus, have recently concluded a project looking at fungicide resistance in pyrethrum and alternative methods for effectively managing disease. The project, ‘Understanding the evolution of fungicide resistance for durable control of fungal pathogens in pyrethrum’, was funded through an Australian Research Council Linkage Grant.

“In about 2009, the local pyrethrum industry started to notice control failures where fungicides were not performing effectively, which suggested some pathogens may be developing resistance. This led to the development of this project to better understand fungicide resistance at the molecular level,” Dr Scott said.

“Fungal diseases can result in severe yield losses which pose a risk to the pyrethrum industry’s continued productivity and sustainability. Our research found that over-reliance on a particular chemical can lead to resistance and that tan spot disease has a high capacity to develop resistance to a broad range of chemicals.

“Fungicide resistance is an increasing concern for the majority of crops around the world, not just pyrethrum. Its development renders chemicals ineffective and allows fungal diseases to continue unchecked.

“TIA’s disease management research aims to be responsive to industry needs, and we work in collaboration with industry to ensure information is shared and distributed to growers through field officers and industry events.”

BRA is a key collaborator in a new three-year research project led by Drs Scott and Pearce. The project, ‘Integrated disease management in pyrethrum’, is funded by Hort Innovation using industry levies and funds from the Australian Government.

“As part of this project we will be conducting field experiments both on commercial farms on the North-West Coast of Tasmania and at TIA’s Vegetable Research Facility – as well as lab based experiments. At the moment we are evaluating alternative methods of disease control to mitigate the effects of resistance, including options for non-chemical based controls,” Dr Pearce said.

“We are exploring options that could minimise reliance on fungicides, such as more strategic applications of when the fungicides are applied and a better understanding of how disease spreads between seasons.

“For example, we know that disease remains in stubble after pyrethrum is harvested. If we remove this stubble before planting a new crop, we may be able to reduce fungicide use during the season. More effective disease management may also allow growers to harvest high yields from crops for multiple years, which significantly increases its economic sustainability.”

Dr Pearce said alternative methods of disease management could have a range of benefits to industry, including increased profitability by reducing input costs and ongoing environmental benefits. Findings from the research may also be relevant to other agricultural industries.

This article appeared in Tasmanian Country on 17 November, 2017 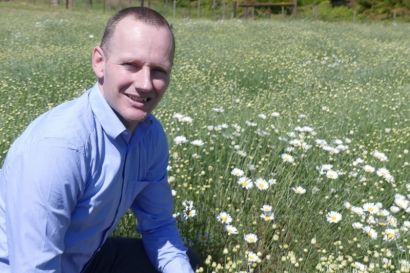 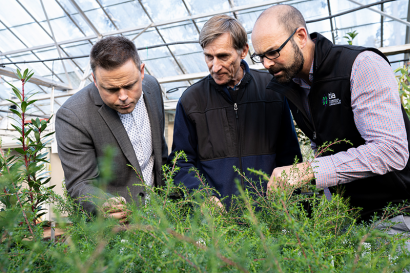