A couple who moved to Tasmania less than four years ago are already making their mark on the Tasmanian dairy industry.

Genaro and Rosselyn Velasquez from Edith Creek were today awarded the 2020 Fonterra Share Dairy Farmer of the Year Award.

The award was announced in a special live stream event with the finalists, hosted by the Tasmanian Institute of Agriculture (TIA) and DairyTas.

Genaro and Rosselyn are both qualified veterinarians and started their career in the dairy industry after moving to Australia from Venezuela in 2009.

After working on both beef and dairy farms on the mainland they moved to Tasmania in July 2016.

They currently share farm for Michael and Cheryl Hughes at Edith Creek on a cents per kilogram of milk solids arrangement, where they are milking 470 crossbred cows.

The Share Dairy Farmer of the Year Award aims to highlight how farmers can use share farming as a career pathway to build wealth.

The three finalists were judged on their financial performance, alongside their skills in people, pasture and herd management.

The judging panel consisted of TIA’s Symon Jones, Troy Franks from Fonterra and the 2019 winners of the Fonterra Share Dairy Farmer of the Year Award Damien and Brooke Cocker from Sheffield.

Mr Jones said one of the things that stood out to the judges was the focus the couple had on their professional development.

“They have taken every opportunity to learn and develop their skills in order to help them progress their dairy farming careers,” Mr Jones said.

“They have attended a number of workshops facilitated by TIA, including pasture management and pasture coaching workshops and our general dairy discussion groups.

“The development of their skills as dairy farmers has enabled them to maximise every aspect of their production system.

“On their current farm, they have been able to increase herd numbers and subsequent milk production from 190,000kg of milk solids to 207,000 kg of milk solids in their first season, which is a very good result.

“They also have the cows producing close to 1kg of milk solids per 1kg of liveweight, while only using around 1.3 tonne of grain per cow.”

The judges commended the other two finalists – Craig and Zoe Waterhouse at Marrawah and Marcus and Simone Haywood at Ringarooma.

“Each of the share farmers exhibited a great attitude and were continually improving milk production,” Mr Jones said.

The Share Dairy Farmer of the Year Award is proudly sponsored by Fonterra who are also sponsoring the Employee of the Year award as a way of recognising the critical role people play within the industry, and to highlight the various avenues available in dairy careers.

Five more awards, organised by DairyTas, will be announced in April and May:

The Share Dairy Farmer of the Year Award is supported by funding through the Dairy HIGH project, which is a partnership between Dairy Australia and TIA.

Ramping up legumes in dryland and irrigated pastures 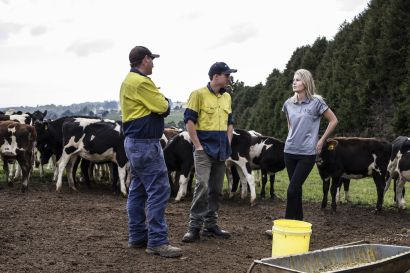 Irrigation tool helps farmers get more crop for their drop 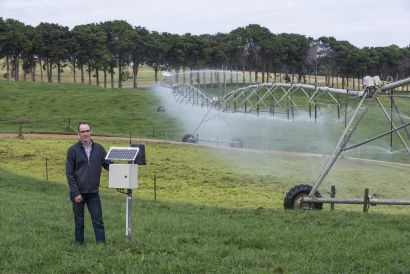