What is the weather during the first month of winter going to be like? The forecast from the Bureau of Meteorology indicates it is more likely to be wetter than average for the northern regions of Tasmania (Figure 1). For July, there is a slightly higher chance of exceeding the median rainfall in both the north-west and north-east. For the remainder of the dairy regions in Tasmania, there is an equal chance of July being either drier or wetter (Figure 2). Similar to the maximum temperature, the minimum temperature for June is more likely to be warmer in June for all of Tasmania except the northwest. In the north-west there is an equal likelihood of it being warmer or colder than median (Figure 5). The likelihood of exceeding the median minimum temperature is slightly lower in July (compared to June) for most dairy regions in Tasmania but it is still more likely to be warmer (than colder) in July (Figure 6). The pasture growth outlook for June and July is positive. Based on the climate forecasts, it is likely to be wetter than average, but not excessively wetter and both the minimum and maximum temperatures are likely to be above the long-term averages. This should lead to at least average or even above average pasture growth for the start of winter.

Soil temperature can be a good guide to potential pasture growth rates. Data from the Smarter Irrigation project weather stations shows soil temperature is about 10°C at Waterhouse, Elliott and Lileah but is less than 100C in the Meander district (Figure 7). Soil temperatures this year are similar as to the same time last year at both Meander and Elliott although are trending slightly lower this season (Figures 8 & 9). Higher soil moisture levels can reduce the amount of warming in soils occurring during daylight hours. This means, even if the maximum temperature is higher this winter, soil temperature could still be lower if soil’s are wetter. This could lead to lower pasture growth rates. Wetter soil conditions can reduce pasture utilisation as there is more trampling of pasture and more pugging damage. Having ‘wet day’ grazing strategies can minimise damage to soil and the associated reduction in pasture utilisation.

Strategies that minimise damage to soils and pasture include:

Regardless of whether it is wetter or not this winter, it is highly likely there will be some very wet days. A grazing plan for wet days, that is well communicated to all the team and enacted when needed, will minimise pugging damage and help maintain good pasture growth rates and utilisation through the winter and into spring. Pasture science for the classroom 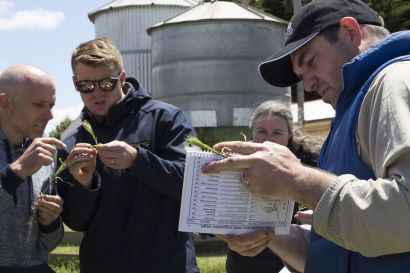