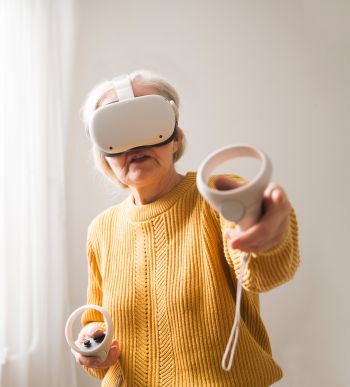 Researchers at the Wicking Dementia Centre and School of Information and Communication Technology (ICT) are developing a virtual reality navigation task in the hopes of using it to identify individuals at risk of Alzheimer’s disease years before the onset of clinical symptoms. The project, led by Dr Maneesh Kuruvilla (Wicking Dementia Centre) and Dr Winyu Chinthammit (ICT), aims to investigate aspects of the brain’s internal GPS, which might be susceptible to the early stages of Alzheimer’s disease pathology.

The ability to diagnosis adverse changes to brain health 15-20 years before neurodegenerative disease can not only shape strategies taken to prevent cognitive and motor decline but also utilise disease-modifying therapies being developed that will be most effective in the pre-clinical stages of the disease. This is crucial given that the various costs related to dementia in Australia are estimated to reach $1 trillion over the next four decades.

To generate awareness about this project, members of the Tasmanian public will have the opportunity to meet the researchers and have a go at walking around virtual environments using a VR-headset at the upcoming Dementia, Prevention and Well-being Expo in Hobart on Thursday 28 April.