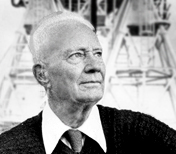 The University of Tasmania School of Mathematics and Physics runs a museum at its Mt. Pleasant Radio Telescope Observatory just off Richmond Road, Cambridge (turn off at the Frogmore Creek  Winery). View Google Map

The radio observatory has been operating for more than 20 years, with its distinctive 26m diameter radio "dish". Sharing this beautiful spot overlooking the Coal River Valley is a museum that showcases the life and work of Tasmanian radio astronomer, Grote Reber. The museum also showcases the radio telescopes and radio astronomy work of the University of Tasmania.

Grote Reber was the father of radio astronomy, being the first person to build a "big dish" antenna for the purpose of mapping the sky at radio frequencies. He discovered many discrete radio sources, and he mapped the band of bright radio emission from our Galaxy, the Milky Way.

Reber came to Tasmania in the late 1950s because of its unique location at high magnetic latitude in the southern hemisphere. He spent 40 years studying low frequency emissions with telescopes he built himself, first in partnership with the University of Tasmania School of Physics, and later on his own at Bothwell. His accomplishments are remarkable, not only in radio astronomy but also in electrical powered transport, in carbon dating of aboriginal settlements, and in the patterns made by growing bean plants. His creative vision had no limits.

The museum also shows the radio frequency spectrum with graphic illustrations and physical demonstrations of electromagnetic waves. The radio sky is shown, with matching illustrations of galaxies as seen in the radio and optical spectrum data acquired by the Hubble Space Telescope.

A feature of the Museum is a Virtual Reality Theatre, provided by the Swinburne University of Technology. The museum will show entertaining and educational movies and demonstrations in three dimensions.

The museum is open to school groups and the public but reservations are necessary.