Occulting the Screen: A Methodology for Manifesting Agency Through Performative Animation. 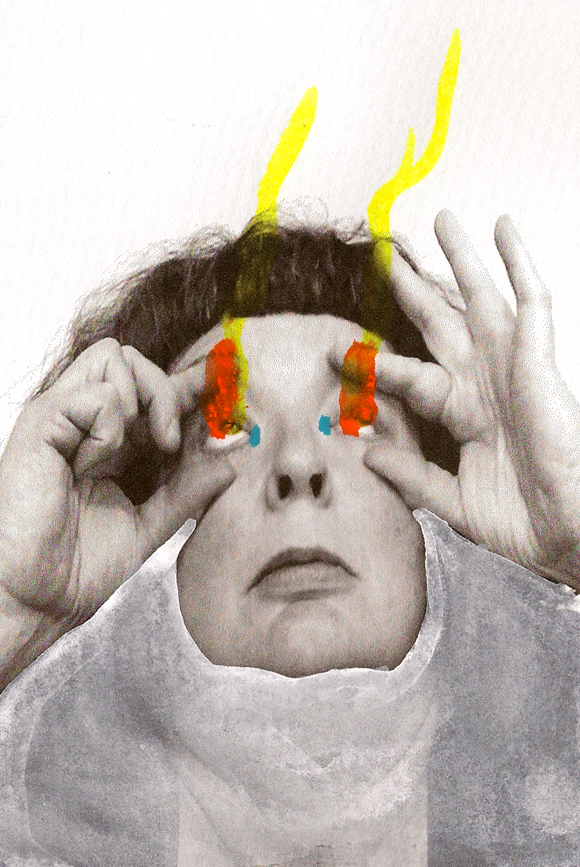 This thesis connects animation to arcane or shamanistic practice, as a speculation upon the effectiveness of moving images as sigils – symbolic representations of desired outcomes. The series of videos are hand-painted rotoscope-style animations applied over photographic video, presented as short loops in the gallery context.

The project builds upon dual traditions, first combined in Surrealism, of politicised esotericism and psychoanalytic theorising of the unconscious. Building on the Surrealist tradition, the thesis incorporates current neuro-scientific knowledge of brain plasticity and references occult imagery to communicate the esoteric and intangible nature of cognition.

The works manifest ‘porosity’ in their layered and fluid form and position the screen as an agent site; a place of mediation between what is, and what is willed. Charles Taylor’s A Secular Age(2007) defines contemporary, secularised society as a zone of ‘buffered’ identity as distinct from the more ‘porous’, enchanted existence of our forebears. This project sought to produce a contemporary porosity, and drew on the films of Stan Brakhage and the early short films of David Lynch, both of whom use the mark of ‘the artists hand’ as a means to make manifest upon film, what the camera cannot capture. In the manner of Canadian witch artist duo Fastwürms, and the radical, second wave feminist group W.I.T.C.H. (Women’s International Terrorist Conspiracy from Hell), this project employed the promise of occult forces to remediate orthodox social forms.

Themes of disenchantment, disengagement, the Freudian concept of wish-fulfilment and agency were developed in a studio process that harnessed performative and painterly gestures. Unfolding no narrative, the works are neither pictorial nor cinematic. They are both solid (held within a screen) and gossamer (projected light).

The imagery was developed from improvised actions before the camera. The video footage was transformed through automatist, ritualised overpainting of each frame, which was then re-animated to produce a looping, rhythmic effect that operates like a repeating chorus or a mantra. The rhythmic aspect of the works equates to an active hoodoo mechanism: their occulted cycle is completed by an audience invited to enter an uncensored or ‘gnostic’ state.

The project is invested in experiential, liminal and gnostic states and the pursuit of porosity, those of both maker and viewer. It is performed as a counteractive approach to rationalism and with acknowledgement of female potential and the power of intuitive states to human self-actualisation and consciousness.

The artworks slip between the concrete actualisation of the still image and the temporal state of the moving image. Exhibited according to a spatial logic that lies between 'white cube' and 'black box', the works are activated through concentrated focus, and thus operate according to the logic of sigils: manifestations of wish or intent, strengthened through ritualised acts of will.