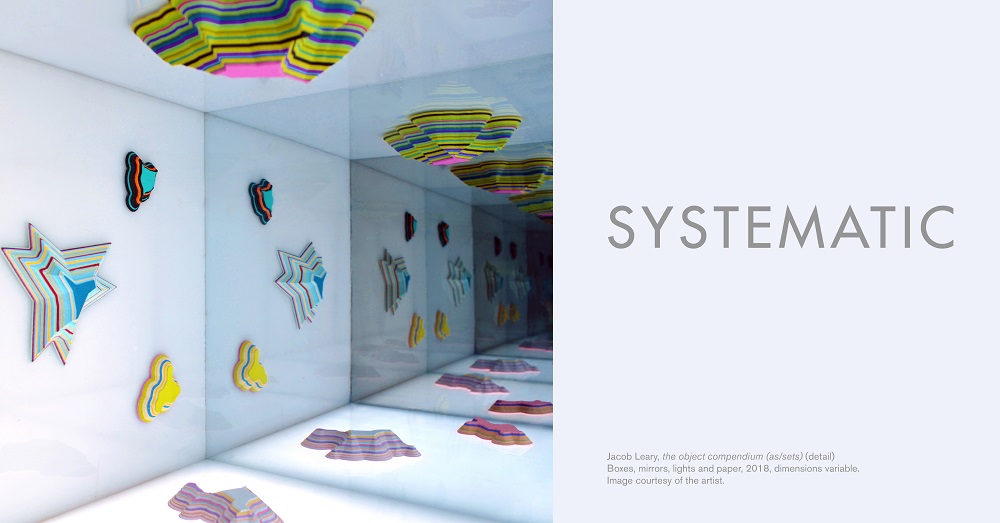 Join the artists at the Plimsoll Gallery, UTas as they discuss their works in Systematic with curator Eliza Burke.

Systematic is an exhibition showcasing eight Australian artists whose works engage with the creative potential of systems to critique, re-imagine or re-invent their workings. Ranging across sculpture, installation, photography, generative animation, painting and assemblage, the exhibition is a playful blend of vibrant and kinetic works that invites viewers to reflect on various contemporary systems and their operations. Posing the question of ‘how things work’ as an imaginative proposal, the exhibition highlights processes of connectivity, organization and inter-relatedness and the interconnections between several different areas of contemporary arts practice.

The works in Systematic explore the material dynamics of systems through engineered connections and intricate componentry, constituting systems in their own right, or engaging with systems principles at conceptual and/or material levels. Through references to the technological, conceptual, ecological and political histories of ‘the system’, the exhibition invites viewers to explore the shifting definitions of what is ‘human’ in the vast network of systematic relations that impact on our daily lives.’

BOOKING essential due to limited numbers.

His works are included in major public collections including the Museum für Moderne Kunst, Frankfurt am Main, Germany, The Museum of Contemporary Art, Sydney, The National Gallery of Victoria, Melbourne, the Art Gallery of South Australia, and the Australian Center for the Moving Image as well as many important private collections such as the 21C Museum, Kentucky, USA, the Jumex Collection, Mexico, the Berge Collection, Spain, the Detached Collection, Australia and the Chartwell Collection, New Zealand.

Ian Burns is based in Queens, New York.

Tricky Walsh works both collaboratively and in a solo capacity on projects that focus on spatial and communication concerns. Whilst using a diversity of media (architecture, painting, drawing, sculpture, installation, sound, film, comics, radio) it is foremost the concept at hand that determines which form of material experimentation occurs within these broader themes.

Tricky Walsh is based in Hobart, Tasmania.

Jacob Leary is a multi-disciplinary artist with a practice spanning a range of mediums including painting, sculpture, prints, video and installation. His recent creative outputs emerge from his current PHD research (UTAS) and its particular focus on ‘object essences’ as outlined by aspects of speculative realism. His research into the ontological foundations of the ‘as-structure’ of art has produced a logic with which to see art objects as a manifestation of an alien presence with their own form of agency, a contingent and contradictory force.

Jacob Leary is based in Hobart, Tasmania.

Bill Hart is Head of Discipline, Art and Lecturer in Time Based Media at the School of Creative Arts where he teaches and lectures in topics around moving image, animation and interactivity, and the general problem of how to make art with technology. He has explored the uses and applications of computing for over 30 years in theoretical physics, oceanography, system and network design, scientific visualisation, digital imaging and software art. As an artist he works through a deep engagement with technology to explore the application of new technologies to the visual arts through digital image making, robotic drawing, animation with generative systems.

Bill Hart is based in Hobart, Tasmania.

Eliza Burke is an independent curator and writer based in Hobart. Her work is fuelled by an interest in the creative potential of hybrid and collaborative forms across the arts and sciences, and inter-disciplinarity as both a concept and practice. She holds a PhD in Comparative Literature and Cultural Studies (2004) and an MFA in Art Theory (2015) and has held a variety of project co-ordination, research and teaching roles across the arts, social sciences, health and education sectors. Solo-curated exhibitions include Full Void(Tasmanian Museum and Art Gallery, 2017), Ghost Biologies(Contemporary Art Tasmania, 2016) and Trace (Rosny Barn and Schoolhouse Gallery, 2010) with other recent curatorial roles in Broken Bodies (Plimsoll Gallery, 2017) and Tempest (Tasmania Museum and Art Gallery, 2016). Her critical writing includes catalogue essays and articles, reviews and essays in publications such as Artlink, Art Guide Australia, Feminist Media Studies, and Australian Feminist Studies. She currently teaches, researches and curates in the interdisciplinary field of Arts and Health at the University of Tasmania.