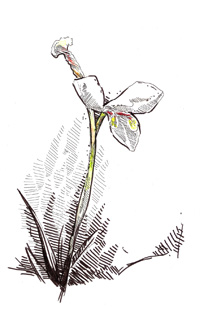 Tasmania is a particularly scenic island with a particularly brutal and tragic colonial history. The settlement of Van Diemen's Land (as Tasmania was then called by the British) in the first decade of the nineteenth century expanded rapidly with an influx of transported convicts, free settlers and capital. Violent conflict soon erupted between Tasmanian Aboriginal peoples and pastoral settlers encroaching upon the homelands and hunting grounds of resident clans. During the 1820s conflict between colonists and Aborigines in the 'settled districts' escalated. This culminated in the declaration of Martial Law and the notorious 'Line' campaign in which 2,000 armed men-soldiers, free colonists and convicts-advanced through the countryside in formation to dislodge recalcitrant clans.

Despite a successful guerrilla campaign against outlying settlers, protracted conflict, disease, economic and cultural disruption took its toll on Tasmania's Aboriginal peoples and the original population of 4,000 (a conservative estimate) had by 1830 been reduced to only a few hundred. It was at this time that the colonial government launched its 'Friendly Mission' campaign, designed to circumambulate the island gathering up remaining Aboriginal clanspeople. By 1835 most Aborigines had been expatriated and resettled at the notorious 'Wybalenna mission' on Flinders Island in eastern Bass Strait (the body of water separating Tasmania from the Australian mainland). Here they lived in material poverty, suffered draconian control, disease and met untimely deaths. By 1847 only forty-seven were surviving and these were relocated to an abandoned penal station at Oyster Cove in Tasmania's southeast. When Truganini died in 1876 the accepted wisdom was that the Tasmanian Aboriginal 'race' had perished and 'the Aboriginal problem' been solved once and for all. These assumptions, however, proved to be a false.

While the traditional clanspeople encountered by the British in Van Diemen's Land are long gone, Tasmanian Aborigines are not. Despite the rigorous colonial campaign to physically remove them from the settled districts, their segregation and acculturation and the subsequent denial of their existence, there is still a sizable number of Tasmanians who identify as Aboriginal. These people trace their ancestry to members of the colonial Aboriginal diaspora, predominantly the small island communities in Bass Strait off Tasmania's northeast tip, and while there is still a significant population on the islands of the Furneaux Group, Aboriginal communities exist across all regions of Tasmania.

For a comprehensive Tasmanian Aboriginal history from first contact to the 1990s see Lyndall Ryan, The Aboriginal Tasmanians (1996 [1981]).