Of the fifteen Young Irelanders transported to Van Diemen's Land between 1849 and 1850, four (Mitchel, Martin, O'Doherty and Dowling) were transported for treason–felony or seditious journalism; four others (O'Brien, Meagher, MacManus and O'Donohoe) were transported for an unsuccessful rebellion at Ballingarry in July 1848; and yet another seven were transported for their involvement in an attack on the Cappoquin Police Barracks in Waterford in July 1850. The Young Irelander exiles in Van Diemen's Land differed considerably in their character, class status and personal histories — ranging from semi-illiterate men to descendants of Irish kings — but their common quest for Irish freedom links them inextricably together.

Several of the exiles were leaders of great importance to the Young Ireland movement in Ireland and became internationally renowned. Some think Mitchel was the most famous. One historian claims that Mitchel was the 'most admired, complex and controversial Irishmen of the nineteenth century', while another sees him as 'Ireland's most popular hero' after the great Irish nationalist leader, Daniel O'Connell.1 Although the seven most famous Young Irelanders remained in Van Diemen's Land for only six years at most, their lives have bestowed a colourful and lasting legacy of adventure and romance upon Tasmanian history.

John Mitchel was born into a middleclass family near Dungiven, County Londonderry, in 1815.1 The son of a Presbyterian minister, he was educated at Dr Henderson's school at Newry and then Trinity College, Dublin, where he matriculated in 1830. An 1888 biographer writes that Mitchel took his degree there in 1834 although a later biographer notes that his name does not appear in the 'Catalogue of Graduates'2 . In any event, after university he started work as a bank clerk and then became a solicitor. Mitchel demonstrated great love and compassion for both his country and his family. His marriage to his young Irish sweetheart, Jane Verner (known as Jenny), lasted his lifetime. Mitchel's advocacy of freedom and self-determination for the Irish people appears to have been ethnocentric since he did not extend this either to the convict population of Van Diemen's Land or to the slaves of America's south. Nevertheless, Mitchel was a passionate and sincere man and these personality traits, combined with his unquestionable literary talents, subsequently earned him a place in history as one of Ireland's greatest writers. Mitchel's seditious and inflammatory articles advocating the militant overthrow of British rule in Ireland earned him the enmity of the British Crown. He joined the Young Irelanders as a young man of about twenty-seven through his acquaintance with the editor of The Nation newspaper, Thomas Davis.3 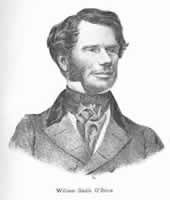 William Smith O'Brien, who arrived in Van Diemen's Land at the age of forty-six, was the oldest of the Young Irelanders transported to the colony. Born in Dromoland, County Clare, the second son of Baronet Sir Edward O'Brien, O'Brien’s aristocratic lineage can be traced to the ancient earls of Thomond and the most famous Medieval Irish High King, Brian Boru, a fact he was conscious of throughout his life.1 A Protestant by birth, O'Brien was educated at Harrow and Trinity College, Cambridge. Later he became a Member of Parliament representing Ennis from 1828-31 and County Limerick from 1835-49. Although subscribing to the Church of Ireland, he rejected religious sectarianism and wholeheartedly supported the Catholic Emancipation Bill of 1829. He deplored the idea that any type of sectarianism might incite civil war. His wife, Lucy Gabbett, the daughter of an influential Limerick alderman, supported him in his political activities, as she did also in his exile, but clearly believed her family would be better off had O'Brien left radical politics alone.

Throughout his political career O'Brien was concerned for the Irish poor and believed that Ireland's best interests lay in self-determination. In October 1843 he joined Daniel O'Connell's Association for the Repeal of the Act of Union between Great Britain and Ireland after O'Connell and some of his supporters were charged with sedition. During the period of O'Connell's trial and imprisonment, O'Brien acted as de facto leader of the association until O'Connell's conviction was overturned in 1844. It was, however, in his role as a Young Irelander that O'Brien attracted the British Crown's disapproval. One biographer described O’Brien as a man of contradictions: On the one hand he was a man whose 'transparent integrity' of motive and 'chivalrous devotion to Ireland' secured him the 'enthusiastic attachment of the people'; on the other hand he was 'destitute of judgement and foresight, and incapable of prompt decision'. Evidently these latter traits made O'Brien 'singularly unfitted for the part of a revolutionary leader'.2

Thomas Meagher, like William Smith O'Brien, was of Irish aristocratic blood. His family lineage could be traced to the Kings of Munster. Born in Waterford to a wealthy merchant family, he was educated by Jesuit fathers at Clongowes Wood College, Kildare, and then Stonyhurst College, Lancashire, England. A Catholic by birth, he had a gift for oratory. He was also a handsome man of chivalrous nature, eloquent manners and musical ability, a combination that apparently proved devastating to women. Although Meagher originally proposed to study law he mounted the political platform and became a powerful speaker at meetings of the Repeal Association. At one of these meetings, on 28 July 1846, he spoke against peace resolutions proposed by Daniel O'Connell and passionately refused to condemn the use of arms to gain Irish self-determination.  In his speech Meagher hailed the sword as a sacred weapon, prompting the novelist William Makepeace Thackeray to dub him 'Meagher of the Sword'.

Meagher was one of the founders of the Irish Confederation, a group of Young Irelanders who broke away from the Repeal Association in 1846 because of their different views on the use of violence to achieve Irish self-determination. When the newly formed Irish Confederation appointed a war directory Meagher became a member of this group and 'accompanied O'Brien in his expedition through Ireland for the purpose of organising the proposed revolution'.1 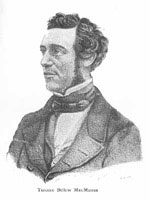 Terence Bellew MacManus was born in County Monaghan to a middleclass Catholic family. Biographers have described him as 'intrepid in temper, tall, and handsome in person, frank and soldierly in demeanour'.1 Although much of his youth was spent in Liverpool where he acted as a shipping agent, he was dedicated to Irish patriotism.  In his twenties, anxious to participate in the liberation of Ireland, MacManus joined the Young Irelanders in the Irish Confederation and actively supported their activities to overthrow British rule by force.  He returned to Ireland to take part in the proposed rebellion and stood by Smith O'Brien's side at the insurrection at Ballingarry. 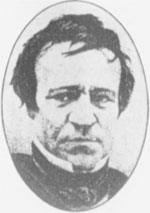 Patrick O'Donohoe was probably the least glamorous and least well known of the seven ‘gentlemanly’ Young Irelanders transported to Van Diemen's Land.1 He was born in 1808 at Clonegal, County Carlow, to an Irish Catholic family and practised as a conveyancing law clerk in a Dublin firm. Not a wealthy man, after his participation in the Ballingarry rebellion and his subsequent arrest with O'Brien, Meagher and MacManus, he had no funds to fall back on to support himself in penal exile. This proved to be a constant source of anxiety for O'Donohoe and his wife and family. His overindulgence in alcohol, propensity for injudicious outspokenness and untidy habits frequently got him into trouble and caused the other Young Irelander exiles to lose patience with him. Although O'Donohoe clearly possessed talent, he did not appear to have the character or social authority to realise his potential. He was involved in the Young Ireland Movement through his love for Ireland and his hatred for England and came to notice most particularly through the activities of the Irish Confederation.2 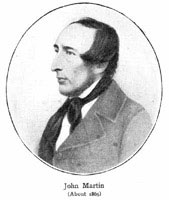 John Martin, a Presbyterian, was born at Loughorne, County Down, on 8 September 1812. Described as 'sturdy and uncompromising', he apparently combined 'a keen sense of honour' with 'much simplicity of character'.1 Martin was a school-friend of John Mitchel, and the two enjoyed a lifelong brotherly relationship. Martin, known as 'Honest John Martin', was dedicated to the cause of Irish self-determination and was popular in Ireland.2 He became involved with the Young Ireland movement because of his advocacy of reform and the repeal of the union between Ireland and Great Britain. In 1868, years after the Young Irelanders left Van Diemen’s Land, Martin married Mitchel's sister, Henrietta. 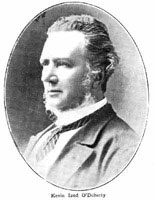 Kevin Izod O'Doherty was a baptised Roman Catholic and the son of a middleclass Dublin solicitor. At age nineteen he enrolled in the Catholic School of Medicine. Before completing his studies he joined the Young Irelanders and in June 1848, with another young medical student and poet named Richard D'Alton William, established the nationalist newspaper the Irish Tribune. As a medical student O'Doherty worked with the poor through the Great Famine and became committed to Irish self-government. He became swept up in the cause of Irish nationalism and the Young Ireland movement's advocacy of rebellion to overthrow the British Government in Ireland.1

William Paul Dowling, the son of a middleclass Catholic Dublin attorney, was educated at the Dublin School of Art.  He operated alongside the Chartists in England but joined and became secretary of the Irish Confederation Davis Club in London. He was not directly involved with the activities of the rebels in Ireland but was arrested for arson attempts in London in August 1848 and found to possess Confederation documents. He was charged with treason-felony and sentenced to transportation to Van Diemen's Land for life on 30 September 1848. Because he was an artist he was allowed to settle in Hobart where he developed a portrait-painting business. His Irish sweetheart, Julia De Veaux, followed him out to Van Diemen's Land and after marrying in 1850 the couple settled down to live out their lives peacefully in the colony. Dowling was granted a conditional pardon in August 1855 and a full pardon in 1857. His final years were spent in Launceston, where he died in 1877. Dowling had relatively little contact with the other Young Irelanders in Van Diemen's Land although on one occasion O'Donohoe took him to meet Mitchel at the Ship Hotel in Hobart where Dowling apparently expressed awe at being in the presence of the 'great man'. 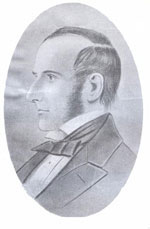 Unlike the 'famous seven' Irish exiles, and even William Dowling, the 'Cappoquin Seven' were all of working-class origin. Because of their lower social status, lesser literary abilities and scarcer personal resources, they have commanded much less attention than the other, more ‘gentlemanly’, Young Irelanders. As one historian put it, they were 'followers rather than leaders — of whom we know tantalisingly little'.1 They did not mix with the other Young Irelanders, owing to their class and status differences, and little has been written about them, so their stories remain a topic for further research.

Of the Cappoquin seven, six lived in Waterford, and one — James Casey — lived in Tipperary. The attack on the Cappoquin Police Barracks, County Waterford, on 16 September 1849 was evidently organised by James Fintan Lalor, an important Irish Confederation leader. Lalor was assisted by a handful of lower-ranking Confederation members who still remained at liberty after the uprising of the previous year. Joseph Brenan, who managed to evade arrest after the incident before fleeing successfully to America, led the attack.

The Cappoquin Seven were not so lucky. All seven were tried at Waterford on 13 July 1850 for their involvement in either attacking or soliciting to attack the Barracks and were subsequently sentenced to transportation to Van Diemen's Land for a period of either seven or fourteen years. They were transported on the Hyderabad and arrived in Van Diemen's Land on 13 December 1850 where they were put to work on the probation gangs and allowed to progress to pass-holder status.  In 1854, just before departing the Island, John Martin made a plea for clemency on their behalf.2 The seven were all conditionally pardoned between 1854 and 1855 and apparently remained in Australia to pursue private, relatively uneventful lives.