What is the German program about?

German is the language of many of the world's best-known innovators, philosophers, writers and musicians. With 81 million people, Germany has the largest population in the European Union and German remains the language with the most native speakers in Europe.

However, you don't have to leave Australia to hear German spoken. With many towns founded by German immigrants, German is a major community language in Australia, and each year Australia welcomes tens of thousands of tourists from German-speaking countries.

While Germany is the EU's largest economy – and fourth place in the world behind the US, China and Japan – nearly a third of Germany is powered by renewable energy. Its legacy of innovation has manifested in Australia through well-known companies like Siemens, Allianz, Bayer, and Volkswagen.

German language skills are an asset in many careers across tourism, international relations, business, interpreting and translation, teaching and the sciences. Whether you have some understanding of the language or are just starting out, we have a range of exciting units for you.

"For me, the appeal of German is encapsulated in the words of the poet Bas Böttcher – Freiheit im Quadrat – a language that combines such freedom and flexibility with form and structure." Globally, German is the 11th most-spoken language, with about 90 million native speakers. In Europe, however, it's the number one most common mother tongue, beating out Italian, French, Spanish, and even English. About 16% of the European population speaks German as a first language.

Why study German with us?

For an experience to write home about, take part in our student exchange program that gives you access to a range of highly regarded partner institutions in German-speaking countries and the chance to travel. Generous scholarships are also available.

Develop your ability in all four essential German language skill sets – reading, writing, speaking and listening – whether you are new to the language or have prior knowledge or experience.

Broaden your knowledge of global cultures and languages by combining your studies in German with programs in French, Chinese, Japanese, Indonesian and Asian Studies also available through the School of Humanities.

Undertake a major (eight units) in German on-campus in Hobart or Launceston.

What careers relate to German?

With demonstrable language skills in German, you can enhance any career and open doors for employment overseas. Graduates from our German program have successfully applied for competitive scholarships in Europe, and pursued postgraduate study at universities in the region.

How can I learn German?

Many people who undertake a major in German do so to master the language itself, or as a valuable adjunct to other study in their undergraduate degree. German is also a popular choice as the Arts major in combined degrees with Business, Science, Fine Arts and Education.

The major involve core and elective units in German which can be identified with HEG in the unit code. The program provides you with a structured pathway through German language learning (written and spoken), as well as units on modern German society, literature, politics and popular culture.

Your learning experience in German goes beyond the lecture and tutorials.

Our research in European Cultures & Languages

Our program has particular research strengths in both the innovative cutting-edge work of France and Germany’s young poets and in the classical writers who have made France and Germany famous for literature, drama and poetry.

Many of our research students work within these disciplines but we also actively advocate for projects that move beyond strict disciplinary boundaries, while being theoretically grounded. Our research strengths include the following areas: 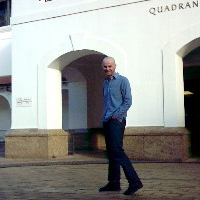 Billy is a Senior Lecturer and Coordinator of German in Global Cultures & Languages. His research interests centre on contemporary German spoken-word and performance poetry, and include an understanding of metaphors of poetry and the communicative potential of poetry.