Tasmania can be a global leader for dairy welfare and sustainability

A paddock of cows with suckling calves is not something that is commonly seen on dairy farms, but a world-first research project is exploring the potential for this to become a viable option of calf rearing.

The Tasmanian Institute of Agriculture’s Dairy Research Facility (TDRF) at Elliott, in North-West Tasmania, is the site of a commercially risky trial to explore the potential for a dairy production system where cows rear their own calves and are milked once a day.

Dr Megan Verdon is a Senior Research Fellow with an interest in the development of livestock systems that achieve continual improvement in animal welfare and productivity while also responding to consumer expectations regarding how production animals are managed. She leads TIA’s animal production and welfare research group and is widely recognised for her expertise in this field.

“Tasmania has an opportunity to lead the charge and be a global leader in sustainable production systems for animal health and welfare,” Dr Verdon said.

"There are broad opportunities associated with this, including the ability for producers to gain access to niche markets by appealing to the social, health and environmental interests of consumers."

The conventional practice on commercial dairy farms is to separate calves from their dams (mothers) within 24 hours of birth. Calves are reared in purpose-built sheds where they are protected from the weather and fed a controlled volume of milk solids before eventually joining the dairy herd as an adult. This early separation is thought to create less stress than later weaning and allows for close monitoring and control of calf health.

However, research indicates the early calf environment can impact the resilience and future productivity of heifers, and there could be multiple benefits to keeping calves and dams together for longer.

Dr Verdon said the separation of calves from their dams is an issue that is attracting public interest here in Australia and around the world. She is exploring opportunities for alternate calf raising management strategies that align with changing consumer expectations of animal welfare and are commercially viable.

In 2021, a team of TIA researchers including Dr Verdon, Tom Snare, and PhD candidate Sandra Ospina developed a novel cow-calf rearing system for pasture-based dairies based on once-a-day milking and half-day contact between cow and calf. The trial was undertaken at the TDRF and proved that the system is practically feasible and could offer positive outcomes for animal welfare and productivity.

The 16 cow-calf pairs involved in the trial spent daylight hours together in a day paddock, before being separated overnight with cows in a night paddock and calves housed in an adjoining pen equipped with grain, drinking water and a shelter. In the morning, cows were collected from the night paddock for milking after which they were reunited with the calves to graze the day paddock.

The data collected revealed that the calves increased their weight more quickly than conventionally reared calves (that were offered 8 litres of milk per day), gaining approximately 906 grams per day vs 785 grams per day. The cows delivered an average of 18.7 litres of milk from once-a-day milking compared with 26.3l per day for conventional twice-a-day milked cows. After the calves were weaned, the cows’ milk production immediately returned to normal volume.

“There is evidence that calves raised by their dams grow more quickly, are more stress resilient, have improved cognitive functions, are better able to adapt to a pasture-based system, and have better social skills when they enter the herd.

“There are benefits for the dams who experience less lameness as they are not walking paths to and from the dairy multiple times a day, and reduced incidences of mastitis as the calves are suckling during the day.”

Dr Verdon would like to repeat the trial on a larger scale at the research farm before applying it to a commercial dairy farm. In particular, she would like to assess the benefits and challenges of this system over multi-generations to determine the effects of dam-rearing on the productivity of the next generation of dairy cows in pasture-based systems.

“There has been limited research in this area and most research on cow-calf rearing has been conducted in indoor barn systems with year-round calving and smaller herd sizes than those found in pasture-based dairies. We believe this is one of the first trials of its kind to be undertaken anywhere in the world. The research that is happening at TIA represents the worlds largest and longest dairy cow-calf rearing trial applicable to pasture-based dairies,” she said.

Dr Verdon recognises that the research is a “bit out there” and is not something that is ready to be incorporated into a large-scale commercial dairy farm just yet. She is looking to the future and urges dairy farmers to consider how they want their farms to operate in 10 to 20 years so that research can be undertaken now to help achieve that vision.

“It could take ten years to find a solution to some of the challenges, so we need to start now,” Dr Verdon said.

“Research is like an insurance scheme for farmers. We can do the work now, ensure it is viable and address the challenges. We all hope we won’t crash our car, but if we do it’s nice to know the insurance is there. If you’re a producer, you may hope future sustainability challenges never arise, but if they do the research has been done and you have an insurance scheme.”

The cow-calf separation trial was supported by the Australian Sustainable Agriculture Scholarship, which was an initiative of CSIRO and TIA. The scholarship supported PhD candidate Sandra Ospina-Rios.

This article was published in Tasmanian Country newspaper on 24 June 2022. 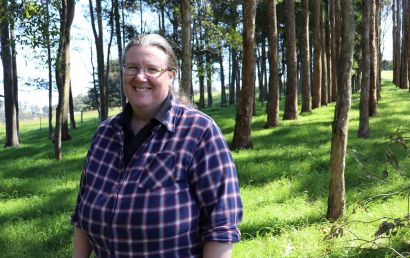