A normal day in Antarctica

Is there any such things as an average day when your office is Antarctica? We asked scientist Dr Felicity McCormack.

Dr Felicity McCormack doesn't like the cold much…which can be tricky given her office for several weeks out of the year is Antarctica.

Dr McCormack is a post-doctoral researcher at the Institute for Marine and Antarctic Studies at the University of Tasmania and she says she has “the best job in the world”.

“My work is using numerical models, so tools that can predict what might happen to Antarctica in the future.

“I’m looking at things like how ice flows, how it interacts with the ocean and with the solid earth beneath the ice sheet, and trying to build up a better picture of Antarctica; its sensitivities and its susceptibility to sea level rise – or how it might contribute to sea level rise,” she said.

The last two summers Dr McCormack has been working with the International Collaboration for Exploration of the Cryosphere through Aerogeophysical Profiling (ICECAP) collaboration. She was based out of Casey Station, one of the Australian Antarctic Territory’s larger bases.

“We’re using geophysical instruments that measure the physical attributes of the landscape, to try and map things like how thick the ice is, where it’s flowing, and how that has been changing over the last decade or so. 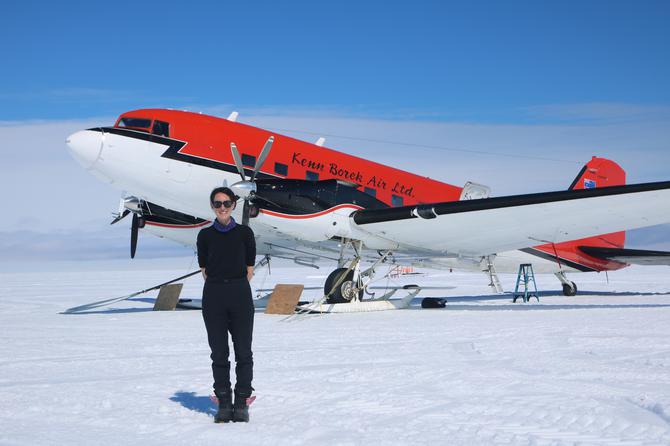 Dr McCormack tells us what it’s like working in one of the most extreme environments on Earth.

6am Rise and shine

I get up reasonably early.  I might go to the gym and then eat breakfast.

We meet with the weather observers, the Operations Manager and the pilots and we’d talk about whether or not it was safe to fly and where we could go. There is a bit of risk management there because the weather can change very rapidly and you just don’t want to be flying if you’re not sure you’re going to be able to land.

If we were going to fly, we’d get all our gear packed and we’d go up from the station to the ski-way to the airplane. That’s about a half hour trip up in the Hägglund, which is this really cool vehicle that’s on tracks.  We’d check all the instruments and probably be up there just after lunch.

4pm Up in the air

We would usually be up in the air for about six hours and we could fly about a maximum of about 900 nautical miles in that period, gathering data of the ice from the air.  Sometimes we’d fly really far away from the base, as far as we could, and sometimes we’d fly reasonably close and do grid-like patterns of flights.

We’d come back to the ski-way at about 10pm.

When we get back on station we’d spend another hour or two fixing our instruments and getting all the data that we’ve collected from the flight. We’d brief our night-shifters, hand over the data and then they’d spend the next ten-ish hours processing it in time for the briefing the next day, so that we could see if there was anything faulty with the instruments or if there was anything more we needed to collect.