Help us change minds for those whose minds have changed.

Almost half a million Australians are now living with dementia. Three times that number are involved in their care. As medical advances enable us all to live longer, these figures are set to increase significantly.

Like so many, Rowena Howard suspected something was wrong with her father long before he was diagnosed.  His vision had deteriorated, he had lost his sense of smell and neighbours reported he was driving dangerously.

A doctor’s appointment resulted in his driver’s license being cancelled, but it would be another year before an official diagnosis. Her father had Alzheimer’s Disease. 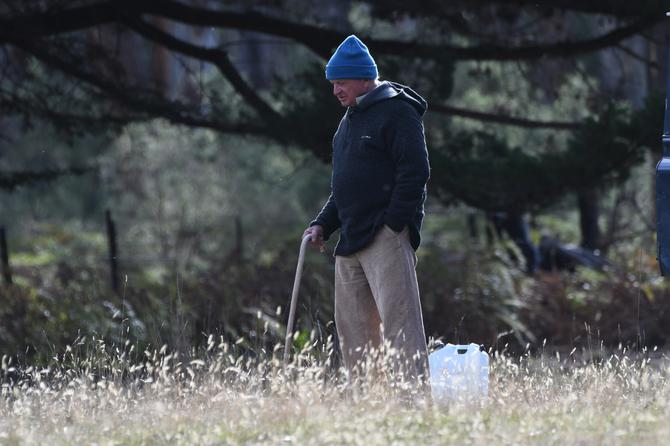 But for Rowena and her husband, Grant, living and working on a farm in the Tasmanian Midlands meant caring for Roger at home was possible, although it would require much thought, planning and, for Rowena, a return to study so she could better understand her father’s condition. Rowena completed the Wicking Dementia Centre’s Massive Open Online Courses (MOOCs) – Understanding Dementia and Preventing Dementia – to assure herself that she was doing everything she could for her father.

I found welcome relief listening to the filmed conversations between care givers, nurses and scientists, I felt like I was sitting in on a conversation with like-minded people even though I was tucked away remotely on our farm.

Six years after the diagnosis, Roger has lost the ability to read and write. He no longer walks with confidence. He shuffles. Rowena helps her father with his basic daily needs, but he still has his thirst for life and loves being on the move, heading out in the car to feed the horses or collecting firewood in the bush with son-in-law Grant. 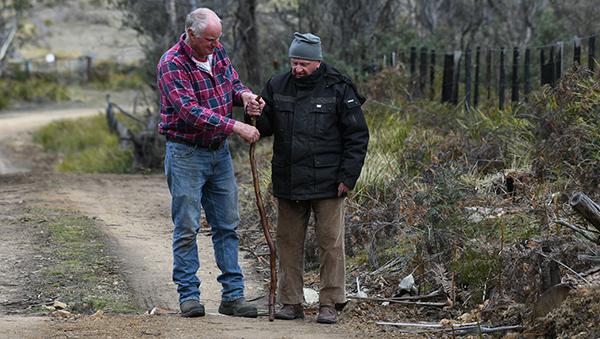 While it is unlikely there will be a cure for dementia in our lifetimes, the Wicking Dementia Centre’s research and education programs give families like Rowena’s the answers they want, and the hope they need.

Education and research contribute to maximising quality of life for those living with dementia, help support families and caregivers, and educate all of us about how lifestyle changes could potentially prevent 40% of dementia cases.

Rowena has chosen to document her family’s journey with dementia in a series of short films to highlight the need for more support for those living with dementia and their caregivers. Read about her reasons below. Why did you decide to share your journey with your father’s dementia?

I wanted to share our experience for several reasons. The primary reason is I am very sad about the way our society cares for our elderly. I rarely see family members taking their severely affected dementia parents out and about. This should be a normal sight.

This is a great time of learning about your parents and how they were before you. You get to find out their whole life journey as old friends get in contact; stories are told, and mysteries uncovered.

The other reason for doing the films was to bring to the government’s attention that more needs to be done. There are ads on TV about keeping the elderly in their own homes, but there is a mighty big gap between those TV pitches and reality. There needs to be more hours provided in Home Care Packages to make this a reality. Dad was a self-funded retiree so we have been ok, but people who don’t have enough financial support will be battling to keep loved ones in their own home.

Lastly, I want to let people know that there are difficult years, but that the disease runs a course. There is often a more peaceful and happy time for the person navigating the disease. There is light at the end of the tunnel for everyone involved.

Dad with Pia the clydie

Tell us about your father

Dad was a very driven man. Having grown up in Sydney and losing his father to Multiple Sclerosis at a young age, he was catapulted into an adult world. Of making the most of every opportunity that came his way to survive the economic pressures of the day. Regardless of Dad’s adversity, he excelled at his schooling, and this was noted by his teachers, thereby setting the scene for him to be offered a scholarship to attend Sydney University. From there Dad graduated in science and pursued a career in therapeutic medicine, as a biochemist.

From 1961–1999 Dad worked for the Therapeutic Goods Administration (TGA) (previously called the National Biological Standards Bureau). By the time Dad retired he was section head of the TGA laboratory in Canberra. Dad’s work life was all consuming. So as a young girl growing up, I didn’t have the kind of attention I perhaps wished for from my dad. Regardless, I never stopped loving him.

Dad has shaped me by just being the person he was. He has taught me to be strong, to question life, authority and to seek answers where some people think there are none. Dad is a fighter, a strong spirit. A man of principle and love for his community. He never gives up and wants to grab life with both hands … even now. 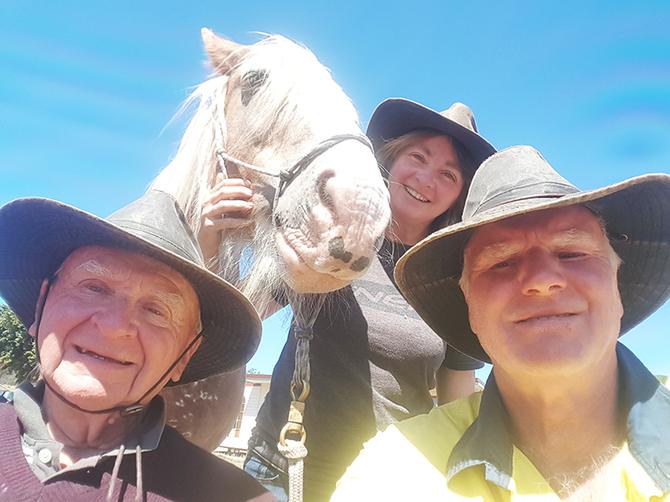 When, and how, was he diagnosed with Alzheimer’s?

Dad was diagnosed with Alzheimer’s Disease in 2015 at the age of 78, but there were already lots of indicators suggesting things were not going well for him.

He surprised me by telling me he wanted to visit us in Tasmania. I was elated and booked his flights but days later he changed his mind. I was furious. When I told him I had booked because he asked me to, he went quiet and said, ‘Did I?’. It was a moment of true realisation for Dad. He knew something was wrong at that point.

Dad had only booked a very short stay, but days out from his return trip I looked him in the eye and said, ‘What are you going to do?’. He knew what I meant and said, ‘I like it here…I want to stay’. The rest as you say is history.

What have been the biggest challenges in caring for him for you and Grant?

The biggest challenges were at the beginning when we were learning how the disease would progress and what caring for Dad would look like for us all.

When he first moved to Tasmania he lived independently.  As that year wore on, his eyesight became very bad. There was an incident where he went to the local shop and bought Drano cleaning fluid instead of jam. Luckily, he put only a small amount on his lips as his instinct was telling him that something was not quite right.

I knew Dad was going to become more and more dependent on Grant and myself and it just seemed a no brainer that the future would involve us all living together. In ensuring that was going to happen, we had to plan and make sure Dad was on board.

What encouraged you to take the Wicking Dementia Centre MOOCs?

In the first few years of caring for Dad I was desperate for answers. I was trying to find ways to slow down the illness. I wanted to work out why he was affected, and I wanted assurance that I was doing everything I could for him.

I had coffee with a friend whose mother-in-law was also living with dementia. We would compare notes and have a laugh to unwind. She mentioned the MOOCs, but it wasn’t until later, when Dad’s challenging behaviour came to the fore, that I went in search for answers. The MOOC was open, and free, so I enrolled. It was brilliant.

The MOOCs were a godsend.  The course should be mandatory for all people embarking on a caring role.  I phoned our service provider asking them to encourage the carers who helped Dad in the early days to take the course. Unfortunately, few took up the opportunity as they aren’t paid to learn. Money always gets in the way.

Why should people support dementia education and research?

This disease is spreading like wildfire, reaching our mothers and fathers, our sisters and brothers, and our friends across the globe. It is even happening in our canine friends.

I have been truly gifted to have this precious time with Dad.  To reconcile past hurt and make peace with the past. In return Dad is now amongst nature, experiencing farm life, horses and dogs.  He is surrounded by love and, as promised, Grant and I, together with our animals, will walk with Dad until his path has ended peacefully here on Earth.

It’s a strange adventure with dementia. But there is peace. There just needs to be consistent unconditional love and life will become easier.