Hidden lenses in the Tasmanian wilderness are providing a rich source of information for our scientists.

Share this
Articles
Researchers at the University of Tasmania have designed and deployed an innovative network of camera traps across the state to monitor our threatened wildlife and track invasive species such as feral cats.

Cats are an enormous environmental problem in Australia, with the introduced species estimated to kill more than three billion animals per year.

Monitoring cat populations is key to reducing their impact, however most methods such as spotlight surveys and track counts are ineffective in forested areas.

To help address this, a team of wildlife ecologists led by Dr Jessie Buettel alongside Professor Barry Brook have developed a new way to track feral cats using their extensive network of camera traps. Dr Jessie Buettel sets up a camera in the Tasmanian wilderness.

Dr Buettel says it is one of the largest-scale networks of its kind in the world with more than 1,300 unique camera sites and 600 currently active camera traps, and counting, deployed across Tasmania.

“The camera trap network started in 2015, with the first units deployed in the south-west of the state before being gradually rolled out across all the different regions in Tasmania,” Dr Buettel said.

So far we have amassed three-quarters of a million unique images of animals across 150 species, including more than 50,000 images of Tasmanian devils.

To handle such a large database of images, Dr Buettel and Professor Brook, in collaboration with Dr Zach Aandahl, are also developing an animal detection and classification tool capable of identifying the wildlife species within the images with over 99 per cent accuracy.

“Our aim is to design a permanent wildlife monitoring system that automatically captures, assesses and classifies all the different species found in our forests, woodlands and grasslands,” Dr Buettel said.

“This allows us to find out where our species are, how they select their habitat, and how they respond to changes to these habitats caused by natural disturbances like fire and human impacts like land clearing, forestry activity and tourism.

“For important species-specific projects like that on feral cats, the benefits are that we can track where these animals are, how many there are, and how they are impacting other vulnerable species.” 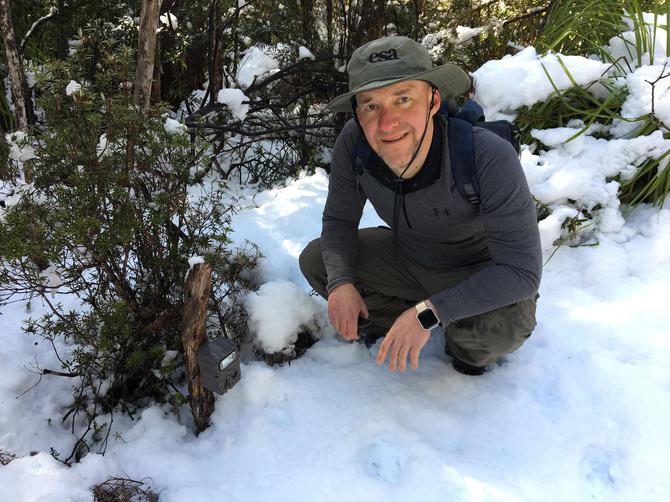 The camera traps work by taking an image when they sense the movement and heat from an animal in their field of view.

Once harvested, the image is then processed automatically by the animal detector and classifier in two stages – first using Microsoft’s AI Earth open-source MegaDetector that finds the animal in the image and puts a bounding box around it, isolating it from the background of the image.

This cropped animal image is then passed through and assessed by a deep-learning computer-vision algorithm, or classifier, to identify what animal it is.

The tool has currently been trained to identify 31 of Tasmania’s more common species, including herbivores like wallabies and possums, large carnivores such as feral cats and Tasmanian devils, and smaller creatures like bandicoots, native rodents and ground birds.

The challenge now is to improve the ability of our tool to classify some of our more rare and cryptic species that are not captured as often on our cameras. A wedge-tailed eagle captured on camera.

The camera-trap network will be expanding further this year, with 400 more cameras set to be deployed in the most remote areas of Tasmania; regions that have never been surveyed and are only accessible by helicopter or via long hiking expeditions. This remote-deployment work will be co-led by intrepid explorer and bushman, Kenji Sabine.

Alexandra Paton, a PhD student in the School of Natural Sciences, is using this new wealth of information to monitor feral cat populations across Tasmania and working to improve how we track and measure their abundance.

Growing up on the West Coast, the University’s innovative approach is providing the budding invasive species detective with an opportunity to tackle one of Tasmania’s biggest environmental threats.

“We know that feral cats are abundant in Tasmania – our camera traps have captured them in areas as remote as the south-west coastline,” Ms Paton said.

“For my project, I will use these data to estimate feral cat densities in different parts of the state, giving us our first real idea of how many cats are in Tasmania, and where they are. This will allow for better targeted feral cat control and prioritisation.

“The cameras are good at detecting cats, but questions remain about where to best place them to increase cat detections, whether or not we should try luring cats to cameras with treats and interesting smells, and whether or not the cats might be afraid of these foreign objects (the cameras) in their habitat, particularly if we use a white-flash at night.”

Ms Paton hopes to find answers to these methodological questions which can inform future research and monitoring programs. 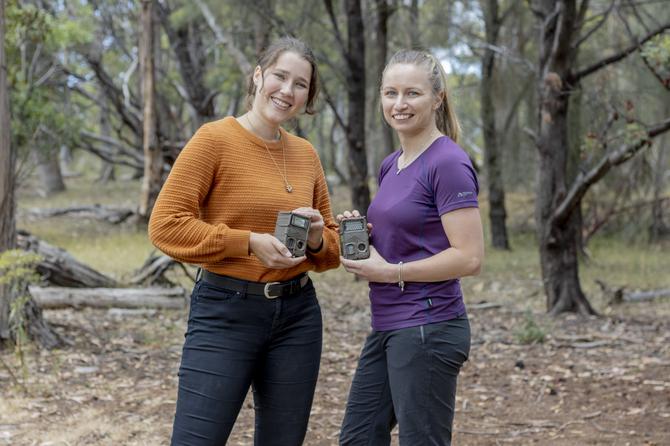 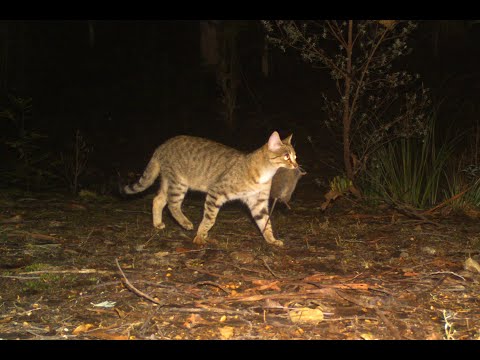 Counting animals with camera traps
Still wondering where to begin?