Dark and twisty, bright and beautiful

A fascinating world of cosplay and Japanese girl culture is on display.

Share this
Articles
Pre-revolutionary France meets gothic horror in an exhibition of costumes and other Japanese girl culture now on show at the University of Tasmania’s Sandy Bay campus.

The exhibition is the work of Japanese literature academic and cosplay performer Dr Emerald L. King, a former University of Tasmania student who has returned as a lecturer in the School of Humanities. For those not familiar with the sub-culture, a cosplayer is a performance artist who dresses in often elaborate costumes and makeup to represent characters from anime, film, video and television. 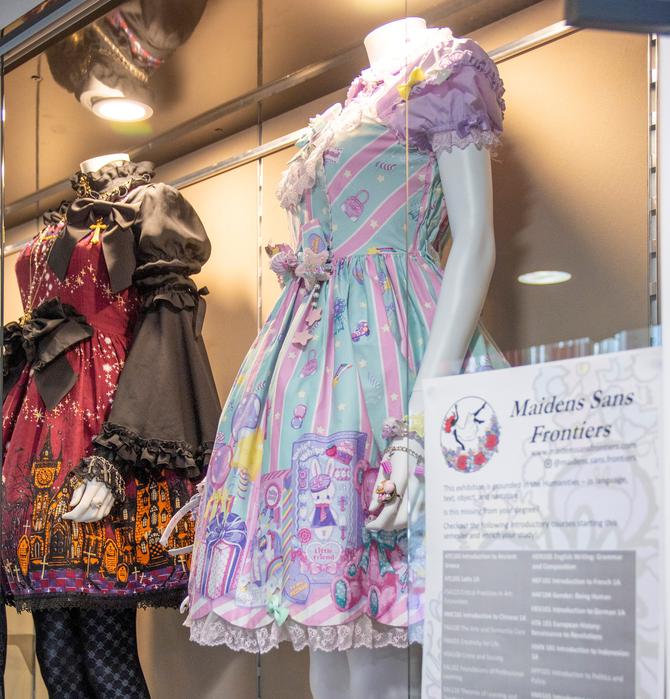 Dr King embraces Japanese girl culture in Australia as both a scholar and a participant. She has hit the ground running on her return with the exhibition of costumes and artefacts titled Maidens Sans Frontiers. It expresses her fascination and immersion in pop culture, costuming and particularly Japanese girl culture.

I am continually blown away by how unifying the act of dressing up as make-believe characters can be. How it overcomes age and language barriers.

Dr King is an expert in Japanese literature and describes herself as ‘interested in most things dark and twisty’. She has created over 40 costumes based on anime and manga, often incorporating antique kimono silks. Examples of these can be seen in the exhibition now on at the Morris Miller Library. Since 2017 she has worked as a volunteer interpreter and translator for the World Cosplay Summit, which is held annually in Nagoya, Japan, and is basically the Olympics of cosplay. In 2020 she was named a World Cosplay Summit Support Ambassador. Cosplay and shojo are two elements of Japanese youth and popular culture; not all cosplay is shojo, and vice-versa.

Shojo culture can be traced to the early 1900s when youth culture emerged as a space in which young people could grow, play and study in between the life stages of child and adult. “When I think of shojo it brings to mind frilly dresses, delicate flowers, glistening sweets and treats, bloody guns, dark desires, beautiful kimono silks, and cats. Lots of cats,” Dr King said.

Cosplay in Australia can be traced roughly to the late 1990s/early 2000s. “As university anime societies started to provide an easy access to anime, other elements of fan culture came along,” she said.

“Cosplay in Australia was initially linked heavily to Japanese source material but as superhero films have become blockbusters, dressing up as western heroes has become more accepted in the scene.” Dr King attributes the popularity of cosplay and shojo culture to the freedom of identity they represent and foster. The figure of the shojo is a contradictory one - she is neither a woman nor a child.

”There is a freedom represented in the figure of the shojo that can translate to cosplay and may give an insight into the ongoing popularity of Japanese youth culture. Due to their age shojo are often free from responsibilities such as work or child-rearing, leaving them free to study, read, create and fall in love. There is an opportunity here for a selfishness that might not be forgiven in other femme presenting roles or character types.”

Maidens Sans Frontiers will be on display at the Morris Miller Library for the coming months. It is a collaboration between Dr King and Dr Lucy Fraser from the University of Queensland with curatorial advise from Emily Wakeling, and is supported by the Japan Foundation.