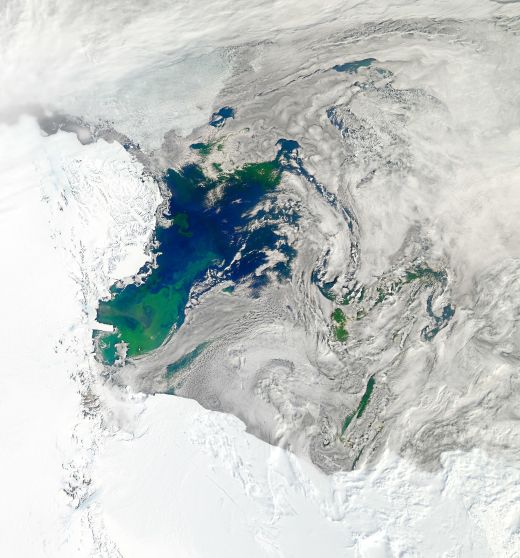 International legal agreements could be used to protect Antarctica’s increasingly important role in carbon sequestration, according to a new Institute for Marine and Antarctic Studies (IMAS)-led study.

As Antarctic ice shelves, glaciers and sea ice shrink due to climate change, algal blooms of phytoplankton thrive in the newly ice-free waters of the continental shelf, locking away CO2 as they die and sink through the water column.

Known as Antarctic blue carbon, the world’s largest increasing natural form of carbon storage contrasts with shrinking mangrove and seagrass habitats in warmer parts of the world, which remove CO2 more effectively, but on a much smaller scale.

“It is ironic that Antarctic ice loss is potentially leading to part of the solution to climate change, which is causing the ice loss in the first place,” Dr Bax said.

“We propose that strong protection is required for the rich and productive biodiversity around Antarctic continental shelves, not just for what it is – a significant natural mitigation of climate change – but also for its massive potential as this role expands and rises in value in future.

“Actively removing CO2 from the atmosphere is required to meet global targets limiting climate change, as simply cutting emissions is not enough.

“Attempts to industrially sequester CO2 are so far expensive and small-scale, whereas the Antarctic process is already happening naturally over a vast area which is likely to continue to grow as the ice recedes further.

“We estimate the economic value of CO2 sequestered around the Antarctic to be as much as $3.2 billion, and the potential for this to increase should be considered as part of global efforts to mitigate climate change,” Dr Bax said.

Dr Bax said precautionary conservation and cooperative global governance is needed to protect Antarctic ecosystem services, such as blue carbon, from potential future threats likely to disturb the seabed or cause biodiversity loss.

“Protecting Antarctic carbon sequestration is an important challenge which has largely been ignored in international agreements.

“The key issue is developing the right links between these agreements that can provide states with a significant extra incentive to protect Antarctic blue carbon stocks,” Dr McGee said.

Co-author Professor Marcus Haward said a range of mechanisms had been suggested to safeguard Antarctic ecosystems, including Marine Protected Areas, or a non-market framework through the Paris Agreement.

“This approach could also pave the way for states to count carbon emission reductions for foregoing fishing or other activities in the relevant areas, which would provide an incentive for nations to act.

“A unique opportunity exists before fisheries establish in newly ice-free areas where the establishment of a protection and incentive system can serve as an alternative to traditional economic exploitation, ultimately satisfying multi-national commitments to protect life on Earth,” Professor Haward said.