An innovative new autonomous underwater vehicle (AUV) capable of diving up to 5,000 metres, operating underneath the ice and gathering data on Antarctic research missions was unveiled today at the University of Tasmania’s Australian Maritime College (AMC).

During an official ceremony, the $5 million polar vehicle was granted the name nupiri muka, which means 'Eye of the Sea' in palawa kani, the language of Tasmanian Aborigines.

nupiri muka is funded by the Australian Government through the Antarctic Gateway Partnership — a $24 million Special Research Initiative of the Australian Research Council (ARC) that aims to provide new insights into the role of Antarctica and the Southern Ocean in the global climate system. AMC contributed $3 million to the cost of the vehicle.

The vehicle will be maintained and operated by a team of specialist research and technical staff at AMC’s Autonomous Maritime Systems Laboratory, a new engineering research facility that was also formally opened at the College today.

University Vice-Chancellor Professor Peter Rathjen said the AMC had developed a nationally-recognised strength in specialised research and technologies, such as the design and use of autonomous devices and related capabilities, blended with the University’s expertise in human factors design, robotics and sensing technologies.

“This new facility will advance the signature contributions of the University and its partners to climate sciences, and Antarctic and Southern Ocean research. There are also rich opportunities at AMC for Tasmania to explore the application of these new technologies to modern naval defence, marine biosecurity and cyber marine opportunities, for example. 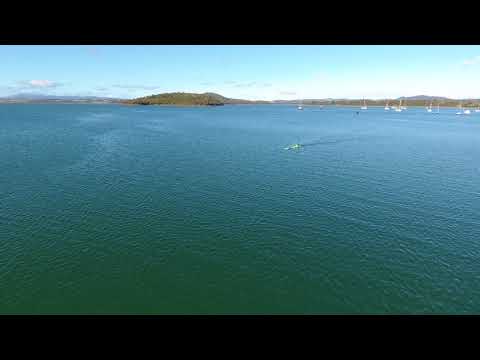 AMC is well placed to host a centre of innovation which builds on the capabilities it has developed as well as drawing in new businesses, he said.

University Provost Professor Mike Calford said: “The College works closely with local, national and international agencies to undertake research and develop capability in maritime engineering, exploration sciences and off shore decommissioning, among a range of specialist activities. The power of this funding is it allows us to take undertake groundbreaking research in a particular field while growing and adapting our capacity for possible new endeavors for the region.”

The AUV is a vital research tool that will be deployed in the Antarctic by Australian and international researchers, including from the ARC Antarctic Gateway partners the University of Tasmania, CSIRO and the Australian Antarctic Division (AAD).

“The development process has built strong technical collaboration between AMC and the AUV manufacturer, International Submarine Engineering (ISE) of Canada. Proven concepts of underwater vehicle design and instrumentation were used, together with innovation in the integration of the operating systems and instrumentation.”

AMC’s strong background in maritime engineering, naval architecture and maritime training makes it ideally suited for such innovative vehicle development. This is bolstered through a strong partnership with the University's Institute for Marine and Antarctic Studies (IMAS), AAD and CSIRO in marine and Antarctic science.

nupiri muka is the newest and one of the most capable AUVs in the world for use under sea ice and ice shelves. It will allow us to further build our global reputation for engineering in extreme environments, and help foster strong ties with the international research community, Professor Bose said.

“Alongside our other vehicles and thanks to our strong engineering and research team, we are well placed to undertake a range of academic, national interest and industry-partnered projects.”

AUVs are self-powered, untethered free-swimming robots that use propellers and control planes to travel through the ocean, near the seabed or underneath the ice. They are equipped with a range of sensors that gather information about the surrounding environment, for example, the shape and composition of the seabed and underneath the sea ice; the temperature, saltiness and chemical composition of the water; and the detection of geographical features and man-made structures.

AMC AUV facility coordinator Peter King said the features of the polar underwater robot made it ideal for deployment in challenging, under-ice conditions.

At nearly seven metres long and weighing one-and-a-half tonnes, nupiri muka's endurance enables it to travel more than 140km or 24 hours without needing to be recharged. It’s also highly customisable, such that the engineering team can install a range of instruments in addition to those already on board, Mr King said.

“nupiri muka completed its first set of trials in Tasmania this past July. The vehicle performed according to plan, completing several successful dives in the North Tamar. Subsequent longer and deeper trials are planned for coastal Tasmania over the next few months, with the goal of an Antarctic deployment in 2018/19.”

Keen to dive into research? Apply now to become a research student.

Tasmania has a real critical mass in terms of Antarctic robotic research.

A PhD in Tasmania means studying in a place of relaxing natural beauty.