For the first time a team of international researchers has been able to shed light on powerful deep ocean volcanic eruptions and how magma rises from the crust to the surface.

University of Tasmania researchers led an international study of the 2012 eruption of Havre volcano – the largest deep-ocean eruption of the past century.

Havre is located about 1000 kms off the North Island of New Zealand, and was only discovered and mapped in 2002.

In 2012, a gigantic pumice raft (400 sq kms in size) was detected floating in the ocean near New Zealand, indicating a submarine volcanic eruption had occurred.

The size of the pumice raft and the time over which it was generated was established by satellite imagery.

“We knew it was a large scale eruption, approximately equivalent to the biggest eruption we’ve seen on land in the 20th Century,” lead author and University of Tasmania volcanologist Dr Rebecca Carey said.

“Having the pre-eruption map of Havre volcano allowed us to know exactly what and where the new eruption products were on the submarine edifice.

“This event is a scientific gold-mine as for the first time there are quantitative constraints on submarine eruption dynamics, and the role of the ocean in modulating those dynamics.

"With 80% of the Earth’s volcanoes located on the seafloor, the study of submarine volcanism is very important – volcanism is an important source of heat and chemicals to the ocean and also supports life.”

University of Tasmania researchers from CODES (Centre for Ore Deposit and Earth Sciences) and the School of Natural Sciences joined international collaborators including Woods Hole Oceanographic Institute for the two-year study.

The team used submersibles including a remotely operated vehicle and an automated underwater vehicle to map, observe and collect samples from Havre volcano.

"There are conceptual theories about how deep volcanic eruptions should be relatively passive, forming lava flows due to the huge amount of pressure from the overlying water column,” Dr Carey said.

“This is the first event of high silica magma composition where we are able to provide the constraints that test whether the hydrostatic pressure did suppress explosivity.

“We were able to demonstrate that the eruption was very complex, involving more than 14 aligned vents that represent a massive rupture of the volcanic edifice.

“We were also able to demonstrate that 80 per cent of the volume of the pumice was delivered to the pumice raft and efficiently dispersed into the Pacific Ocean landing on Micronesian island beaches and the East Australian seaboard.

“The record of this eruption on Havre volcano itself is highly unfaithful - it preserves a small component of what was actually produced, which is important for how we interpret ancient submarine volcanic successions that are now uplifted and are highly prospective for metals and minerals.” 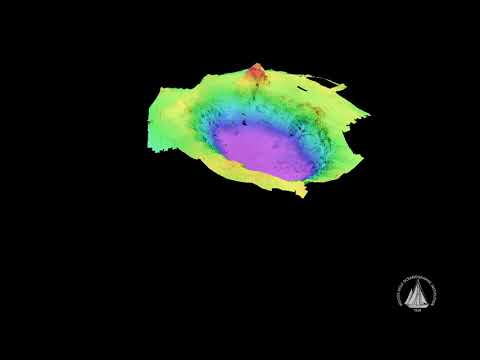 Dr Carey said data collected for the study has also led to much interest from the broader scientific community.

“The eruption blanketed the volcano with ash and pumice and devastated the biological communities. Biologists are very interested to learn more about how species recolonise, and where those new species are coming from,” she said.

“We also discovered new infant hydrothermal systems, and observing how they recover after such a large event is of importance.

“There is a decade worth of interdisciplinary science to do based on our 2015 voyage data and samples. It’s very exciting to marry the geosciences with other scientific disciplines addressing novel research questions.”

The study, The largest deep ocean silicic volcanic eruption of the past century, was published online in Science Advances.

Keen to make your own discoveries? Find out about beginning a research degree at the University of Tasmania here.

Dr. Rebecca Carey is a Senior Lecturer and Australian Research Council DECRA fellow in the School of Physical Sciences in the Faculty of Science. She is a volcanologist with research themes in Earth and Marine sciences. Rebecca's research uses field studies, microanalytical and volatile analysis on the products of volcanic eruptions to understand magma's ascent to, and eruption at, the surface. Her expertise in volcanology of the modern seafloor and terrestrial settings has proven invaluable for knowledge and understanding of ancient volcano-sedimentary successions.

Tasmania has a real critical mass in terms of Antarctic robotic research.

Devils could be saviours for threatened birds in Bass Strait