Bringing an Australian accent to the birthplace of jazz

In New York City, the epicentre of jazz, Joshua Dunn’s musical background from Tasmania has made him stand out.

Share this
Related articles
If you ask Joshua, New York City is a place where jazz is the native language of musicians.

But as he discovered, having an Australian accent to his jazz playing was a point of difference; one that made him stand out and proved studying jazz as far away as Tasmania allowed him to bring something exciting and new to the dialogue of the native ‘speakers’.

Following a Bachelor of Music at the University of Tasmania, where he graduated with First Class Honours, Joshua is now studying his Masters in the Big Apple at William Paterson University – an exclusive school for talented jazz musicians on a Fulbright Scholarship.

Here he is learning from his jazz heroes. Studying on his vintage 1940 Gibson L7 guitar by day and heading to New York City to listen, or play, by night. But he’s still looking forward to coming home to study his PhD at UTAS. 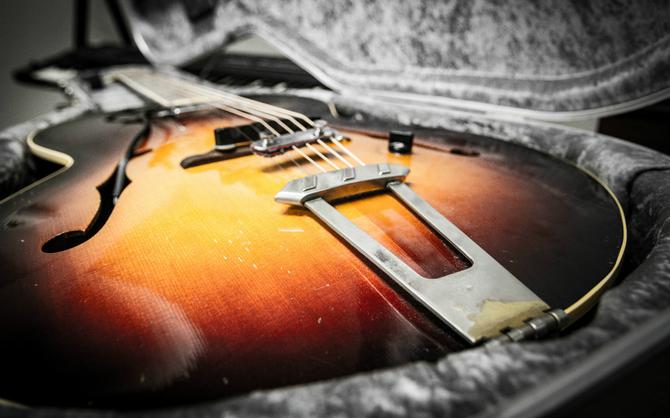 Joshua's 1940 Gibson L7 guitar which one of his musical heros, Matt Munisteri, helped him find in New York.

When I realised that I was going, I was really daunted by it. But my musical education at UTAS prepared me very well. We have a very high level of musicianship and education, and the teachers I had at UTAS are not so different from those I have in the US.

"My teachers at William Paterson were chosen because they are longstanding members of the New York jazz scene. I’m being taught by some of my musical heroes – people like Christian McBride, John Mosca, Armen Donelian, Vincent Herring, Rich Perry, Julian Large, and Matt Monastery."

The thing that Joshua finds so special about jazz is that it is strongly based on innovation, which means that the sound created is really unique to the person that is playing it.

When you play and when you improvise, what is coming out is your musical background. My background is really important to the music that I play.

Joshua started at the Conservatorium of Music when he was just 15 years old, studying a Bachelor of Music alongside his Year 11 and 12 subjects, through the Prelude Program.

“It was amazing. I was in an environment where music was everyone's obsession. They were all dedicated musicians – always practicing, always listening to music, always seeing music. Everyone was just trying to be the best musician they could be.

It was a very supportive environment, but there was also this healthy competition that drove you to be better. It was incredible to be part of that.

After graduating, he successfully applied for a grant from the Australia Council for the Arts, and Arts Tasmania, to do a three-month study project in the USA.

I ended up in New York City for a month and it was eye-opening. I went and saw music on my first night and I just knew that I had to spend more time there. So at night I was seeing music and taking lessons, but during the day I was writing an application to pursue a Masters overseas.

Joshua was awarded the Fulbright Scholarship to pursue his Masters at the William Paterson University in New Jersey, just 20 miles outside of New York.

"I was studying during the day in this exclusive jazz program of about 80 students, and going across to New York City and seeing music at night. It was incredible to be in this world that was the native country of jazz."

Learning jazz in Tasmania is almost as far away as you can be from the original source. Going from Tasmania to New York was a bit like learning a foreign language and then being thrown into a country of native speakers.

In the US, he explained, people are born with jazz and have grown up in that environment.

"What I discovered was that even though jazz wasn’t as ingrained in my upbringing as it was in some of my American friends, because I was doing things differently, that was also an interesting thing."

He discovered that there was an Australian accent to jazz.

If jazz is a music based on innovation, then having a point of difference can be valued. Having an Australian accent to my playing of jazz made me interesting in the US.

While overseas he goes to jam sessions and gigs around in different clubs and bars.

The highlights so far include playing at Dizzy’s Jazz Club, and fronting a band where one of his long time heroes turned out to be his back up guitarist.

“Dizzy’s Jazz Club is a hall of jazz where all of my heroes and people I have looked up to have played at one point in time.

I got a call to do a gig down in New Jersey once where a French guitarist that I had really looked up to, named David Gastin, ended up being my rhythm guitarist for that evening and I had to lead the band.

“I had been listening to his recordings for the last five or six years, and he had played with some of my musical heroes. That was a really special opportunity.” 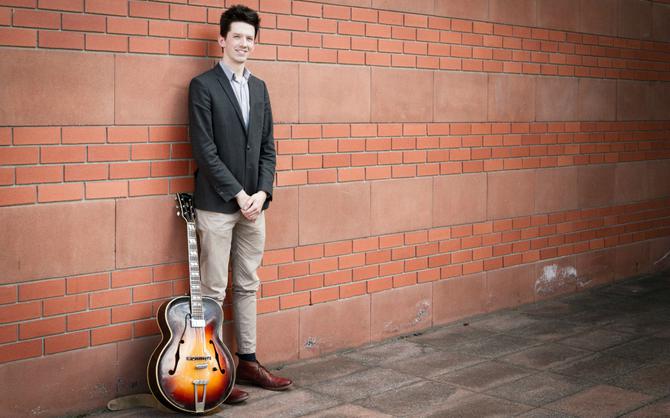 Joshua hopes to return to the Conservatorium of Music after his Masters at WPU to undertake a PhD.

"Going backwards and forwards between New York and Tasmania has been really interesting. At first I thought New York would be home, a massive city with so much music happening. But Tasmania has undergone this massive cultural change where arts and culture is central to our lifestyle."

There are all these amazing musicians down here creating music. There is such a high level of musicianship and creativity in Tasmania. It’s very special.

"If you are interested in pursuing music in a small program with very, very high-level tutors and a very high-level of musicianship, then UTAS and Tasmania are the perfect places to come.

"You will get that one-on-one attention that was instrumental in my success. It helped me to become someone who stood out."

Apply now to study a Bachelor of Music.

Take a look inside the Conservatorium of Music.