More than 72,000 hectares of western Tasmania have been burned by a cluster of bushfires, most of them ignited by a spectacular dry lightning storm that crossed the island on January 13.

The geographic scale of the fires can be seen on the Tasmanian Fire Service website. These fires pose an enormous, ongoing challenge to the fire service, with little immediate prospect of a speedy resolution to this crisis given the absence of soaking rains in the foreseeable future.

Thankfully there has been no loss of life and comparatively limited damage to property because most fires are in remote areas. But there is mounting concern about the environmental impacts of the fires to the Tasmanian World Heritage Wilderness, especially fires in the Walls of Jerusalem National Park and Cradle Mountain-Lake Saint Clair National Park. Bushwalking tracks, such as the popular Overland Track, have been closed until at least next week.

Faced with so many fires, the Tasmanian Fire Service has implemented a triage process, focusing on threats to life and property. This includes farmland, critical infrastructure such as major hydro-electric transmission lines, and also some core areas with extraordinary biodiversity values.

Why are world heritage values threatened by these fires?

The fires are extremely destructive for two main reasons.

First, the fires are threatening vegetation that is unique to Tasmania, including iconic alpine species such as the Pencil Pine and cushion plants, as well as temperate rainforests.

Second, the fires are burning up large areas of organic soils upon which the unique Tasmanian vegetation depends. It is extremely unlikely burnt areas with the endemic alpine flora will ever fully recover given the slow growth of these species and the increased risk of subsequent fires given the change to more flammable vegetation and the slow accumulation of peat soils, which takes thousands of years.

Past fires have resulted in a permanent switch from the unique Tasmanian alpine vegetation to more fire-tolerant vegetation. 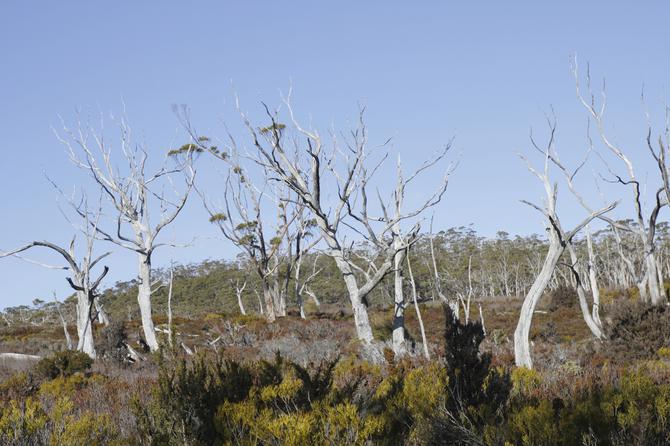 Is climate change the cause?

Destructive fires in the alpine zone are known to have occurred in western Tasmania in the past 10,000 years, yet these fires were extremely infrequent until European colonisation. Due to the reckless use of fire by prospectors, pastoralists, recreationalists and arsonists there has been a drastic contraction of much of Tasmania’s unique vegetation.

Since the declaration of the World Heritage Area, fire has been carefully regulated with a prohibition of campfires, which has sharply reduced the number of bushfires. Unfortunately, over the last decade there have been an increasing number of lightning storms that have ignited fires.

For instance, in 2013 the Giblin River fire that burned more than 45,000 ha was set off by a lightning storm, one of the largest fires in Tasmania in living memory.

The current fire season is shaping up to be truly extraordinary because of the sheer number of fires set by lightning, their duration, and erratic and destructive behaviour that has surprised many seasoned fire fighters. The root cause of the has been the record-breaking dry spring and the largely rain-free and consistently warm summer, which has left fuels and peat soils bone dry.

There are two ways to think about the recent fire situation in Tasmania. We can focus on the extreme climate conditions and unusual fire behaviour, or we can see what is happening as entirely predictable and consistent with climate change.

I have formed the latter view because the current fires are part of a global pattern of increasing destructive fires driven by extreme fire weather.

A critical feature of the current Tasmanian fires is the role of lightning storms – climate is not only creating the precursor weather conditions for the fires, it is also providing the storms that ignite them.

What can be done?

Obviously we need to maintain efforts to contain the fires in the iconic World Heritage Area. Given that such destructive fires are likely to become more common under a warming and drying climate we need to increase the capacity to attack fires quickly using both air craft and specially trained personnel.

However, under a warming climate the ecological niche of much of the unique Tasmanian vegetation is shrinking, so serious thought is required about moving species to artificially protected environments, such as botanical gardens. In the worse case scenario moving some species to sub-Antarctic island may not be far-fetched.

More fundamentally, the loss of vegetation that takes thousands of years to recover from disturbance is a warning shot that climate change has the potential to result in bushfires that will impact food security, water quality and critical infrastructure.

In other words, like the Pencil Pines, our ecological niche will be threatened.