One crop to save them all.

As freakishly warm weather continues to wreak havoc on rainfall over the Pacific, the risk of major droughts and flooding has begun to surge around the world. But there’s another threat to our farmlands that’s a whole lot harder to see – salinity.

While we ramp up our efforts to feed a rapidly expanding population, human activities such as irrigation are causing saline levels in the soil to climb dangerously high, and if there’s one thing crops can’t handle, it’s too much salt.

As Sergey Shabala, Professor in plant physiology at the University of Tasmania, explains, on saline land, productivity can drop by a devastating 80 to 90 per cent.

“It has an economic impact, a social impact, and it can threaten global food security,” he said. “The majority of the world doesn’t have the resources and ability to handle that.”

Around the globe, it's estimated that salinity is claiming three hectares of usable land every minute.

The reason it’s so devastating for crops is that it restricts their uptake of water and essential nutrients such as potassium and calcium, causing reduced growth and development.

It can also mess with the plant’s ability to photosynthesise, and can cause a toxic build-up of sodium and chlorine salt in the leaves, leading to browning, wilting, and eventually culling.

But there are a select few species that can tolerate what would be deadly levels of salt in the soil. Even rarer still are those that flourish in it.

Halophytes, or salt-loving plants, make up less than 0.4 per cent of all land plants on Earth.

And unlike glycophytes (salt-averse plants), they actually benefit from having large amounts of salt in their soil. In fact, you’ll find halophytes thriving under conditions that would kill 99 per cent of the world’s crop species.

So can we turn these salt-loving plants into useable crops? The good news is not all halophytes are inedible. If you’ve ever eaten quinoa – a high-protein, gluten-free grain that looks a bit like couscous – then you’ve already eaten a halophyte. And for all intents and purposes, it’s pretty close to being the perfect crop.

"We believe that quinoa could really save the world from crisis if it’s grown in places where water is not available,” said Professor Shabala.

"In the Middle East, where there are issues in addition to salinity such as heat tolerance, it can still can be grown there. It may be a solution for the coming decades if we invest resources into that."

The crop of the future

Not only is quinoa highly nutritious, drought- and frost-tolerant, and able to grow in saline environments, you can also produce a whole lot of it in a small area.

“The most productive quinoa systems in Denmark and South America can produce 1.5 to 2 tonnes of the grain per hectare,” said Professor Shabala.

"This is comparable with the current wheat yield in Australia, which is 1.9 to two tonnes per hectare of wheat, when grown without irrigation.”

Studies have even shown that if cultivated near the salt desert of southern Bolivia, quinoa can produce a steady supply of seeds where every other crop will flat-out fail.

But there’s more potential here than just trying to convince the world to embrace quinoa - Professor Shabala and his team are figuring out how to impart the superpowers of quinoa to other crops, so they too can withstand saline environments.

The key, said Professor Shabala, is that quinoa plants have evolved specialised ‘salt bladders’ on their leaves, where they can safely lock up the excess sodium.

"Quinoa is often called the 'crop of the future', and we are now trying to incorporate the ability to put salt into external structures into traditional cash crops,” Professor Shabala said. In 2017, Professor Shabala’s team and two other research groups sequenced the quinoa genome, allowing them to understand its inner workings at a molecular level.

When they investigated tiny appendages called trichomes – incredibly fine, hair-like growths that sit on the surface of the leaves – they found that they had been converted into repositories for excess salt.

“We looked at different gene banks from really different places, such as Bolivia and Peru,” said Professor Shabala.

To suggest a link between high salt tolerance and a high density of salt bladders is one thing, but Professor Shabala and his team needed to prove it.

So they grew two different groups of quinoa plants in saline conditions for five weeks. One group was untouched, but the other group had its salt bladders gently removed to see how the plants would respond to the salt.

“With a small cosmetic brush, we removed all of them,” he said. “We kept brushing them for a month – it’s tough work for a student!”

They found that removal of the salt bladders messed with a number of metabolic processes within the quinoa plants, and prevented them from being able to safely sequester salt and chlorine from the environment. Essentially, they’d been converted into salt-sensitive versions of themselves.

The study provided the first ever direct evidence that salt bladders play a key role in salt tolerance in halophytes. 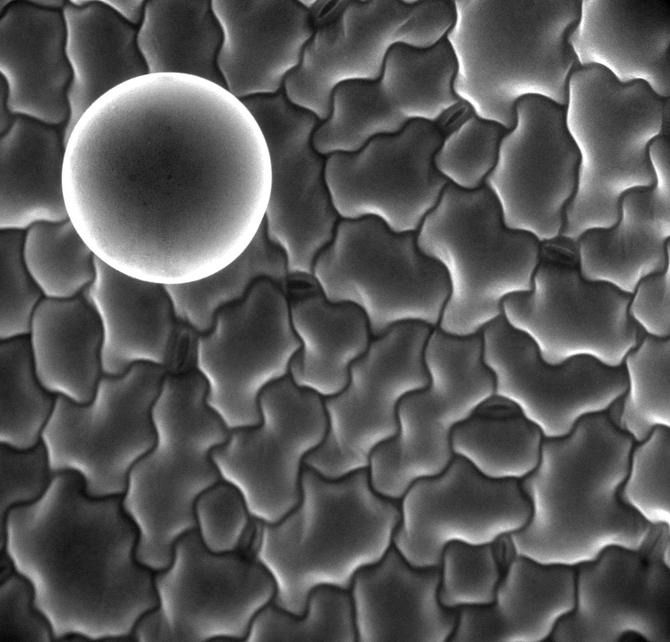 Salt bladders for all

Now that Professor Shabala has his proof, he’s investigating if he can clone the salt bladder genes in quinoa and other halophytes, and insert them into regular, salt-intolerant crops like wheat and barley.

“We know the identity of the gene in quinoa, so we’ll try to clone the gene and put it into the traditional crop,” he said.

“The technologies are in place, so it’s just a matter of understanding which gene to insert, and that’s where we are leading the field.”

The first crops the team want to test the process on are spinach and sugar beet – two salt-sensitive crops from the same family.

“If it's proven, we know we can put them into crops that are even more important,” said Professor Shabala.

“But grasses such as wheat are more difficult to modify, so we’ll need to investigate more to find a way to modify them.”

Only time will tell if quinoa will live up to its title of the ‘crop of the future’, but if anything’s going to save our food supply from the threats mounting on the horizon, it’s starting to look like the best shot we’ve got.