A street art tour of Hobart

Art is all around the CBD.

Share this
Related articles
Looking for vibrant street art in one of Australia’s oldest cities? You’ll need to venture beyond the historic waterfront and into the city’s little-used laneways to find the work of talented locals – and a few well-known interlopers, too.

This is Hobart’s street art hotspot thanks to the VibranceVibrance and Dark Mofo festivals. Long a favourite hangout for taggers, the 2018 Vibrance Festival brought colour to the carpark with more than 20 artists transforming the space over a week in February. It’s here you’ll see the distinctive style of Hobart street artist and UTAS alum Tom O’Hern. Tom uses a hard line to create deliberately crude animals, skeletons and monsters. Hundreds of faces are dotted around the car park here, and two big walls of dinosaurs and happy monsters face off in red and orange and black and yellow. Prolific in his output, Tom is active on Instagram sharing humorous quick drawings and his famous Tasmanian Tiger, which has also been replicated hundreds of time around Hobart.

Street artist and UTAS alum Jamin is another of Hobart’s best-known and most distinctive artists. His 2012 mural along one side of U-shaped Harrington Lane is one of his most enduring works, among many more across Hobart, including city restaurants Frank and Urban Greek, North Hobart cafe Born in Brunswick, New Town’s Cat Clinic, the MONA ferry, several inner-city workplaces and as far afield as the Luzhniki Stadium in Moscow. On Criterion Street you’ll find the work of internationally renowned artist Stormie Mills. Lost Giant depicts a man on his phone and, like all his murals, is painted in Mills’ bleak monochromatic palette – reflecting the clean and the dirty of the city, with silver paint used to reference dreams. The laneway leading west between the Criterion St shops takes you to the pocket park known as Mathers Place, a recent city council rejuvenation project. Here you'll find Tom O’Hern’s Terraform, a 4.5m x 11m mural that O’Hern calls “a foresty thing”. Initially painted in black and white, Tom later added colour. He says he still hears people saying they wished he hadn’t, which inspired him to graffiti his own artwork to capture the sentiment. 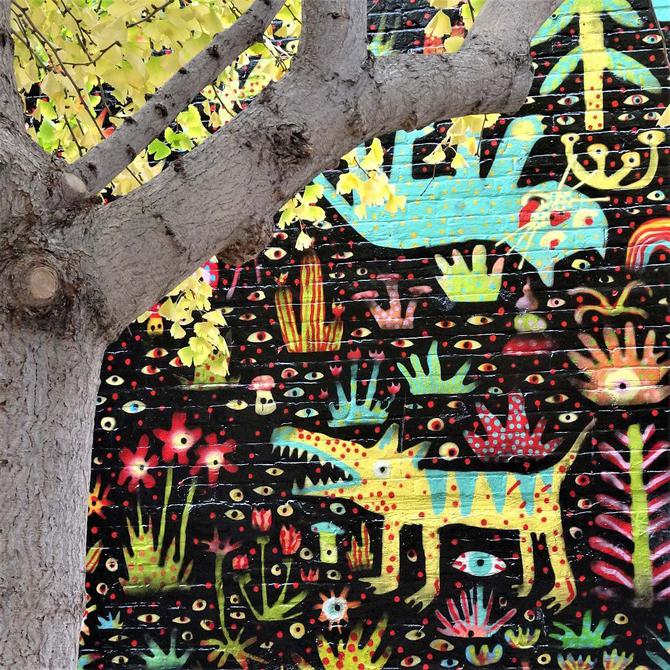 While Ghostpatrol made his name on Melbourne’s laneways, he hails from Hobart and has made several visits home for commissions, including his 2015 collaboration with Bonsai, Yes Mountain on Victoria Street. Look out for the mural in Autumn, when deciduous trees in front of the mural turn red, orange and brown and blend with the artwork behind. You can also see Ghostpatrol’s work on the waterfront and in Sandy Bay. 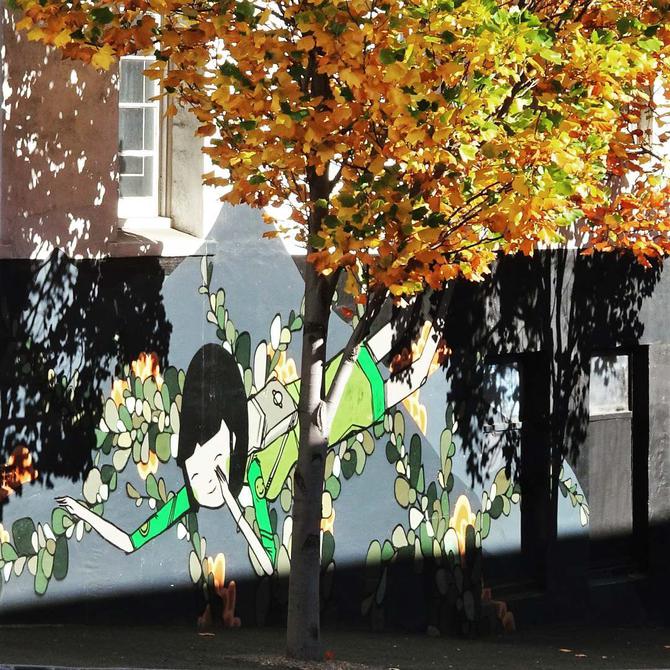 Behind the Elizabeth Street Mall is Purdy’s Mart. Artist Jae Criddle referenced the old emporium on the site with her 3.5m murals of people sitting on antique chairs. Opposite, Amok Island has depicted Tasmania’s spotted handfish in a two-storey work reminiscent of 1980s postage stamps that seeks to create awareness for the endangered species. 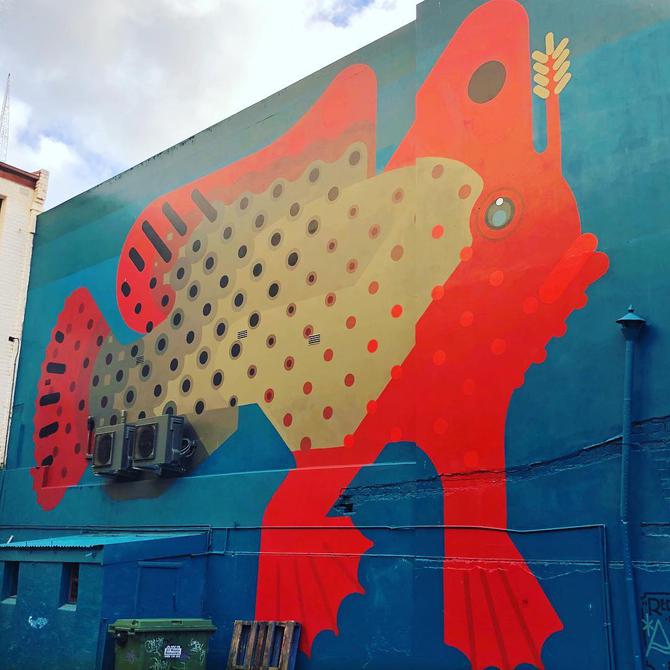 Collins Court features more of Stormie Mills’ distinctive characters in a diptych entitled Everyone Needs a Hand Sometimes. Depicting characters pushing on a swing, it is a fitting mural for a council rejuvenation project that has required give and take to get the balance right. Nearby, Phibs has captured the quick and playful character of local birdlife. 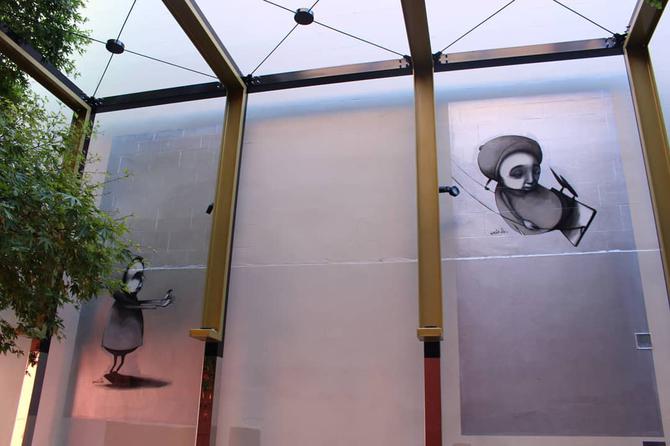 Internationally renowned street artist Smug put up a 6m x 13m mural on the side of a red-brick Victorian building on Tasma Street, North Hobart in April 2018. But this ain’t no undercover stealth art project. Smug was pursued by the building’s owner after he saw the artist's work in Melbourne. The mural depicts local identity Cameron Williams, who regularly sold carved Huon pine ‘heart’ necklaces and brooches at Salamanca Market. Further up Elizabeth St, the North Hobart restaurant strip is another great place to see street art in and on cafes and bars. Considering studying Fine Arts at UTAS? Find out more at Open Day 2018, in Sandy Bay on 5 August, in Inveresk on 11 August and on Cradle Coast on 12 August.

Register now and create your schedule for the day.