Under the dome: Breathing new life into the Forestry building

As part of our restoration of the Forestry Building, we will replant its iconic indoor forest. And that isn't the only new life we plan to inject into Hobart's CBD.

The former Forestry Tasmania building in Hobart has languished in neglect and disrepair for a few years now, but the University of Tasmania is planning to restore it to its full, lush, green glory.

Architect Robert Morris-Nunn, who designed the award-winning restoration of the historic building in the 1990s, is thrilled that the iconic building – with its beautiful glass dome – will be restored and used as a place of learning.

Seeing the building fall into disuse over the last few years has been really sad, so to know that the University is planning to restore it, and even reinstate the forest under the dome, is amazing news.

“The dome was built in the 1990s, added on to an existing structure that dates back to the 1930s, and that dome has been deemed to have enough merit that it is now included in the overall heritage listing for the building.

“It’s the first time anything I’ve built has been heritage listed. So it’s nice to know that legacy is now going to be preserved and given new life.”

The restoration of the Forestry Building, by Woods Bagot Architects, is part of the University of Tasmania’s Southern Campus Transformation, relocating its premises from the current Sandy Bay Campus into the Hobart CBD. Woods Bagot are engaging closely with Robert in their plans for the building’s next chapter. The Forestry building will form part of 'Midtown' – one of five interconnected precincts of the University's city-based campus.

The Forestry Building will form part of the new “Midtown” precinct of the city campus and will house students and staff across Law, Business and Economics. Robert said the best way to ensure the longevity of precious, heritage buildings was for them to be in continual use, which guaranteed they would be maintained and cared for.

He said this ethos of repurposing old buildings for new lives was something Tasmania was very good at.

“That desire to repurpose old buildings for new uses, rather than just tearing them down and rebuilding, is something evolved earlier in Tasmania than anywhere else in Australia,” he said.

“And that is a really positive thing, not just because it shows that people here love their old buildings, but also because the recycling aspect is very important. And about half of the University’s projects for this transformation are recycled or refurbished projects of one kind or another.” 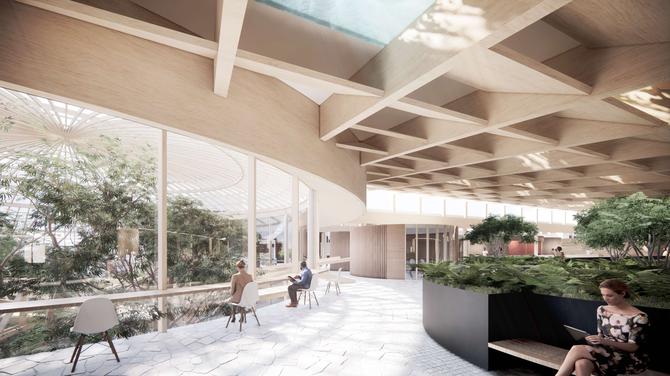 The view from new public spaces in the Forestry building through to the restored native forest under the atrium. Image: Woods Bagot

The building once boasted a spectacular indoor forest in its glass-domed atrium, something described by Robert as unprecedented in Australia. Replanting that forest is a central part of the University’s restoration plans, as well as extensive green spaces linking the forest inside to park areas outside, which the public will be able to enjoy as well as students.

Robert, who is also Adjunct Professor of the School of Architecture and Design at the University of Tasmania, lauded the University’s move into the city, saying it would take time to fully realise but the benefits for the CBD and the University were enormous.

The fact is, the University is in the city in a substantial way already – the Hedberg, the Medical Science Precinct, the Creative Arts Precinct, The Media School and IMAS – and this has already shown it can work.

“Some of the earlier constructions commissioned by the University in the CBD were not ideal additions to the city and were not well received. But the work that is being done with the Forestry Building demonstrates that those lessons have been learned and the upcoming developments are much more sympathetic to the city and their surrounds.”

Find out more about the southern campus we're creating in the city-centre of nipaluna/Hobart.