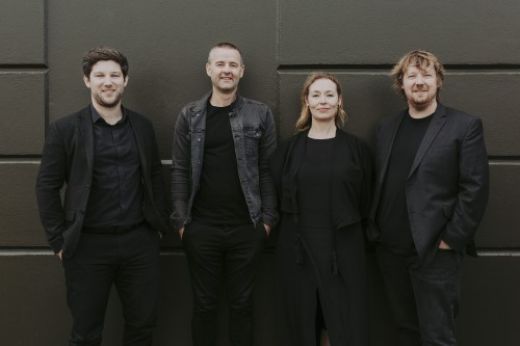 An architecture firm founded by University of Tasmania alumni is one of 10 small firms in the world to watch in 2020.

Cumulus Studio was chosen for the online accolade by Architizer, an international journal based in New York City and curated by architects around the world.

All four directors and more than half of the staff are graduates from the University’s School of Architecture and Design. Cumulus Studio was founded in Tasmania in 2011, and its success shows, with offices now in Hobart, Launceston and Melbourne.

“Being recognised as a leading practice reinforces what a great team we’ve got,” co-director and principal architect Peter Walker (BEnvDes 1997, BArch 1998) said.

“Projects like Devil’s Corner come out of a lot of teamwork and collaboration.”

Peter refers to the Lookout tower that his team designed for the renowned Tasmanian East Coast winery Devil’s Corner. It takes in the expansive vineyards and lagoon which lead visitors’ eyes to the zigzagging skyline of the rocky Hazards at Coles Bay.

“For this project, we needed to think deeply about visitor experience – how people flow around the space, engage with the site and landscape, and the stories that need to be told,” he said.

In non-COVID times, Devil’s Corner is a major tourist attraction. The Lookout calls travellers to stop, admire the landscape and check out the food and wine on offer at the cellar door.

In 2017 the Lookout won an Architizer A+Award in the international ‘Commercial-Mixed Use’ category.

At University, Peter tutored Keith, the most recent addition to the Cumulus directorship. Keith was recognised on the Dean's Roll of Excellence for the Faculty of Science, Engineering and Technology for three consecutive years from 2004-2006.

Todd, a co-founding director and Keith both won architectural research scholarships and completed their qualifications with First Class Honours.

Kylee, co-director and studio manager, and Peter met through the University and are now partners of business and life. As a student in 2001, Kylee won a Department of Urban Design Prize.

Todd and Peter still get asked to be external examiners and Cumulus architect and alumna Pippa Jenson (BEnvDes 2012, MArch 2015) guest tutors our up and coming creatives at Inveresk.

"We see architecture as a way of reinvesting in the State and further contributing to all the little things that make Tasmania a unique, special place to live," Peter said.