"This plant, commonly called Venus' fly-trap, is one of the most wonderful in the world,” Charles Darwin wrote in 1875.

What did the species Dionaea muscipula do to receive such lofty praise? Well, it can catch a meal as large as a frog; it can break down human flesh; and, oddly enough, it can count.

And that’s just the half of it.

"It’s a very unusual and exotic kind of thing,” said Professor Sergey Shabala from the University of Tasmania, whose research has identified traits in the Venus flytrap that could strengthen our crops and shed light on the root causes of many human diseases.

Turns out, we’ve got a lot to learn from the plant that eats like an animal and moves like a vice.

From swampy origins it comes

As always, the driving force behind the evolution of the Venus flytrap was food – or a lack of it.

Its origin story has been linked to ancient bogs, which are one of the most inhospitable environments on Earth, where nutrients are scarce, the soil is poor, and almost everything is in a constant state of decay.

"They originate from swamp areas around the equator where the nutrient content in the soil is very poor,” said Professor Shabala. "The roots aren’t very efficient, so they get their nutrients from animal food.”

Within the family Droseraceae, there are around 150 living species, and each one is a carnivorous plant.

Of these species, all fit nearly into the genus Drosera (aka sundews), except for two – Dionaea muscipula (the Venus flytrap) and its very rare sister species, Aldrovanda vesiculosa, the waterwheel plant.

The Venus flytrap and the waterwheel plant are the only members of their respective genera, and they alone have ended up with a lightning-fast ‘snap-trap’ mode of capturing their prey.

While carnivory in plants has evolved at least six times independently, it’s thought that snap-traps evolved only once, in the common ancestor of Aldrovanda and Dionaea.

The machinery of the snap-trap

“When the animals walk across the plant, it produces a force, and if there are two touches within five seconds, it closes. One is not enough, because it could be a false start, but two means there’s something there.”

Once the prey has ventured into the Venus flytrap’s jaws – often lured in by the sweet scent of the plant’s nectar – the flytrap gets ready to snap shut.

Venus flytraps are equipped with sensory trichomes, which are external, hair-like structures that sit on its surface to pick up signals from wandering prey.

These trichomes work like a booby-trap: they’re connected to an ion channel that’s triggered by touch or pressure.

“Usually it will close by 90 to 95 per cent, but if the animal keeps struggling, it will send additional signals, and close completely,” said Professor Shabala.

Of course, the Venus flytrap will attempt to catch whatever sticks around long enough to provoke a response – and considering its jaws snap shut in less than a second, that’s most things, including frogs: 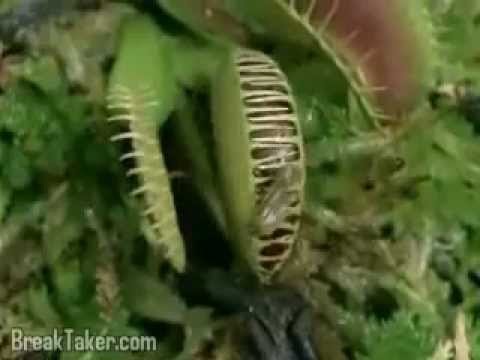 But judging by the size of that frog, it was probably able to escape before the plant could start digesting it.

From exoskeletons to salt overload

The Venus flytrap has evolved one of the quickest movements ever seen in a plant in order to catch its prey, which it then digests using a cocktail of enzymes.

After sealing an insect inside the snap-trap, the plant will emit digestive enzymes from specialised glands to dissolve its tough outer exoskeleton.

Once the Venus flytrap has broken through that layer, it will start processing the insect’s nitrogen-rich blood, called haemolymph.

And in case you’re wondering, yes, those enzymes can break down human flesh, according to Barry Rice from the International Carnivorous Plant Society, who put a slice of his own freshly shed skin into a Venus flytrap:

“After a week, the traps opened. I had predicted the skin chunks would be relatively inert and unaffected … [but they] were almost completely digested. Worse, what was left no longer had much cohesion, but was gooey and slimy.”

One challenge carnivorous plants face is the fact that their food is far saltier than what most plants are used to, so they’ve had to evolve ways of ridding their cells of the excess sodium.

In their 2016 study, Professor Shabala and his team figured out how they do this, and are now working on ways to imbue crops with this trait so they can withstand saline environments.

When they examined the movement of salt from the prey to the Venus flytrap’s ‘stomach’, they found that specialised sodium transporters got rid of the excess salt by depositing it into ‘capture organs’ so it wouldn’t interfere with the plant’s metabolism.

They’re now working on inserting the genes associated with sodium transporters into barley and rice, to see if they can have the same response to salt overload.

“We learn from these exotic situations how to make it more practical,” said Professor Shabala.

The range of techniques Professor Shabala and his team have developed, and are using to figure out the behaviour of the Venus flytrap’s ion channels, goes well beyond Plant Kingdom.

The same approach can be used to gain a better understanding of various human conditions and diseases, because ion channel disorders have been linked to everything from epilepsy and Alzheimer’s disease, to cystic fibrosis and colour-blindness.

“It’s important, because there are 50 or more inherited diseases known in the world that come from the malfunctioning of specific ion channels,” said Professor Shabala.

“And on top of that, there could be another 50 or 150 transporters that we’ve missed, due to limitations of techniques available in the past.”

Perhaps when Charles Darwin once told a friend, “I will stick up for Drosera to the day of my death,” he picked the wrong carnivorous plants to pledge his allegiance to.

One crop to save them all.

This scientist is chasing the secrets of ancient crops