Many people with motor neurone disease will die within a few short years of being diagnosed.

Professor Tracey Dickson, Associate Dean for Research at the College of Health and Medicine and a researcher in the Menzies Institute for Medical Research, wants to help those people.

“I work primarily on neurodegenerative diseases. Most of my research at the moment is focusing on motor neurone disease, frontotemporal dementia, and also Parkinson’s disease,” she said.

Professor Dickson was working as a research assistant when she first became interested in learning more about the brain.

“I had finished my honours, and I hadn’t really done any neuroscience training before that, but that’s when I first was exposed to the brain.

That ignited my passion for trying to understand the many diseases that are affected by our brains, and trying to work out ways to improve outcomes for people with those diseases. 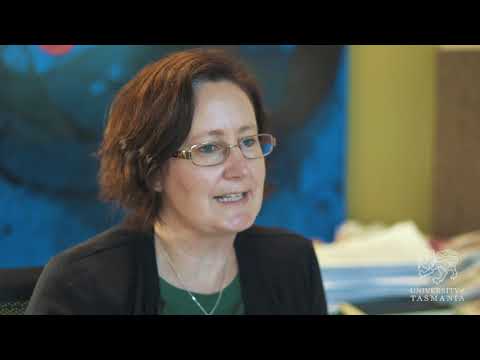 Professor Dickson and her team are currently investigating a drug that they hope will benefit people with motor neurone disease.

“Motor neurone disease is a devastating disease. Many people with it die within two to three years of diagnosis. There are no treatments. There are  certainly no cures. My goal is to help those people.”

Professor Dickson said the problem with many neurodegenerative diseases is we don’t even understand what the cause of the disease is.

“For the last 10 years or so, we’ve worked primarily with lab-based models to ask questions about what might be causing motor neurone disease.

With that work, we’ve now developed this hypothesis that it’s about excitotoxicity, or an overactivity of the brain.

Professor Dickson said our brains are “kind of like driving a car.”

“There’s an accelerator and there’s a brake. These roles are performed by different cells within our brain. We know that in motor neurone disease, and in other neurodegenerative diseases too, that sometimes there’s too much acceleration and not enough brake.

“The drug we’re trialling is hoping to balance that activity and hopefully stop progression of the disease.

“We’ve been able to pinpoint the particular cells that might be affected and causing that, so now they’re the cells that we are hoping to target with this intervention we are trialling,” Professor Dickson said.

Our work has contributed to a large part of research internationally on motor neurone disease.

Professor Dickson said research can be like “a big jigsaw puzzle.”

“Everybody across the world is doing their experiments and putting in a piece, but you’re the first person to do it.

“I love research because every day you can potentially discover something. You or the students in your lab are doing experiments that are being done for the first time,” she said.

It’s an amazing privilege, to be able to do research that means you’re contributing to the discovery.

Professor Dickson's research interests align with one of the University's key research themes of Better Health. She is a neuroscientist with a national and international reputation in determining the pathological basis underlying Motor Neuron Disease, dementia, Parkinson's disease and the neuronal response to trauma. Dickson has established her career by defining cellular mechanisms of neurodegenerative disease through the development of targeted in vitro primary culture models and the pathological analysis of human and transgenic tissue.

We need to think about the legal implications of futuristic biotech

Crossfit for your brain

The Wicking Dementia Research and Education Centre has a new MOOC, Preventing Dementia.

Top of the food chain

Research investigates the feeding habits of these apex predators.