Astronomers have discovered a planetary system about 6,500 light-years away towards the centre of the Milky Way that provides the clearest insight yet into the fate of our solar system.

About five billion years from now, Jupiter is expected to survive the evolution of our Sun into a white dwarf while Earth will likely be destroyed during its intermediary red giant phase.

The international research team discovered a gas giant planet similar to Jupiter, named MOA-2010-BLG-477-Lb, using the world’s largest and most powerful optical telescopes at the W.M. Keck Observatory in Hawaii.

Their observations, published today in the journal Nature, represent the first confirmed planetary system orbiting a white dwarf star that mirrors the expected fate of our solar system.

University of Tasmania postdoctoral researcher and lead author Dr Joshua Blackman said the findings marked a significant step forward in our understanding of how planets evolve.

Our observations confirm that planets orbiting far enough from their host star can survive the death of their Sun. It’s a glimpse into the fate of Jupiter in billions of years when our Sun becomes a white dwarf.

“There are only a handful of other planets that have been found orbiting white dwarfs, and this system provides an important data point that will inform theoretical models of how planetary systems evolve.”

More than 4,500 planets have been discovered outside of our solar system and most of these orbit main sequence stars like our Sun.

Eventually, in about five billion years, these stars will run out of hydrogen fuel to burn and become very dense, dead stars called white dwarfs.

These stars are about half the mass of the Sun, but about the size of Earth, and have a gravitational force so strong that a normal person would weigh more than a hundred thousand times more than they do on Earth.

“The planet is about one-and-a-half times the size of Jupiter and orbits at a separation of about 450 million kilometres – three times the distance between the Earth and the Sun,” Dr Blackman said.

“Unless we manage to colonise other planets or moons further from the Sun, humankind will likely be long gone by the time this Jupiter planet settles in orbit around its dying host.” 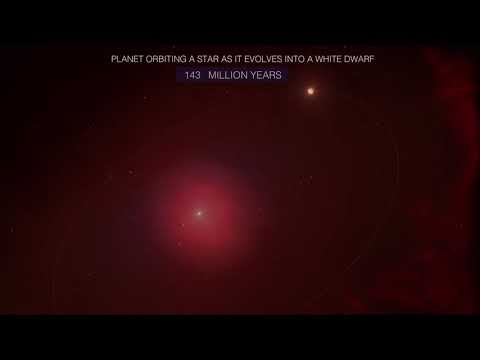 A main sequence star balloons into a red giant as it burns the last of its hydrogen fuel, then collapses into a white dwarf (Credit: W. M. Keck Observatory/Adam Makarenko)

The newly discovered planetary system is about a quarter of the way towards the centre of the Milky Way, well outside the Solar neighbourhood where exoplanets are most often discovered.

We used a technique called gravitational microlensing to detect planets around other stars, which involves the chance alignment of two stars. The gravity of the closer stars amplifies the light from the distant star as they move past one another.

“This research is beneficial to the study of theories of planetary evolution and the relatively new field of planetary systems around white dwarfs.

“Studies like this one and the techniques used will lead directly into planned surveys with the upcoming NASA mission, the Nancy Grace Roman Telescope.”

What will we learn from Pluto?

How New Horizons and Tasmanian researchers are improving our understanding of the evolution of the universe.

Finding a place in Pharmacy

Daniel Hoyle, originally from the North West Coast and with a background in health, didn’t know what he wanted to do when he finished year 12.

Research shows that some initiatives in waste management are working, reducing coastal litter by 29% over the last six years.