Joan Webb is just getting started.

In August, at the University of Tasmania’s winter graduation round in Launceston, she crossed the stage at the Albert Hall and claimed a new honorific. Mrs Webb became Dr Webb, and at only 90 years young.

Though she admits her lust for a Tudor bonnet – the floppy velvet hat Doctors of Philosophy wear at graduation ceremonies – was at least part of the motivation behind her PhD studies, Dr Webb is not content with merely a chapeau and a sense of accomplishment.

“I want to do something useful with this PhD,” she said.

Now she has her hat, she’s turning her attention to researching the most useful politicians to lobby.

She aims to impact government policy, to agitate for changes in practice and programs at aged care facilities, and to challenge ageism wherever she finds it.

“Somehow, old people are put into a different box, like they’re not real anymore." 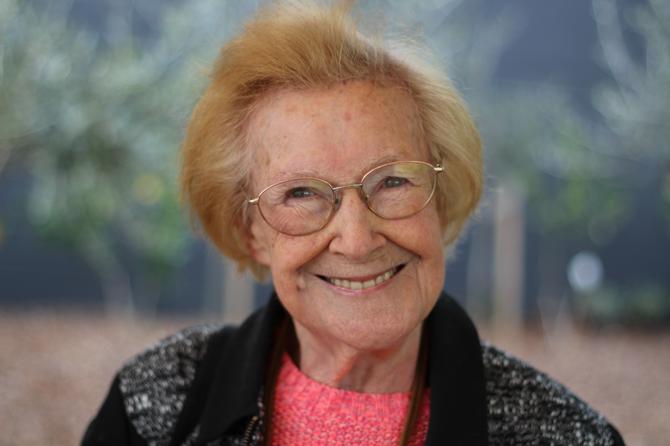 Dr Webb is real. She’s a quick-witted, strong-willed, often mischievous rebuttal to the assumptions that lie beneath ageism. She may be old, but she’s no little old lady.

Born in London in 1926, Dr Webb completed her original teaching qualification in 1963. Twenty years later, after visiting her then Tasmania-based daughter, she moved to her new home in Launceston.

She first volunteered as a teacher at a School for Seniors, and taught literacy in a program for the long-term unemployed. She taught at the Mount Arthur Family School, started the West Tamar Action Group, was elected to the West Tamar Council, ran a B&B, wrote and published a novel and two books of poetry and was placed on the Tasmanian Honour Roll of Women. Among other things.

In 2009, in her 80s, Dr Webb decided to head back to university and enrolled in a two year Graduate Certificate in Education, which she completed in 2010. A year later, she’d knocked off her Masters.

When it came time for her PhD, she found her subject in the classes she had recently established in aged care homes. She’d started them in an effort to take the School for Seniors to those who couldn’t get there on their own.

The School for Seniors was for everybody over 50 but the people in my groups were usually in their 70s and 80s. And they were so enthusiastic, so creative, so bubbling over with wonderful ideas; it was a joy to read their work.

“Then I started to wonder about people who went into aged care homes, about whether they had this sort of opportunity. So I made some calls and I arranged to work at two different places.”

Dr Webb particularly wanted to work with high-care residents, people who struggled to move unaided, but who needed creative stimulation.

Initially, the utter lack of response shook Dr Webb. For the first few weeks, she said, they just sat there with their heads hanging down.

“I did not want this to turn into me reading poems to people. I tried absolutely everything but I couldn’t seem to get through.”

Then, one day, she saw one of the ladies in the group holding a piece of paper.

“And I said, ‘You’ve written something, haven’t you? Can we hear it?’

“So she read it. And it was just fantastic."

“Write me some prose or verse” she said.

Our leader must be off her head.

Brainless I am with naught to say,

No prose or verse has come my way.

My nails are bitten to the quick,

I’ve thought so much my brain is sick,

Solid as rock, heavy as lead,

“Have pity” is my anguished cry,

All words are dying, let them die!

“And everything opened up after that. The work that they did was extraordinary – the sensitivity and the humour.

“The groups were small. One lady was almost blind, and only one person was physically fit enough to get around on their own. But the ideas were gorgeous!"

The story of unlocking this creativity is at the heart of Dr Webb’s thesis. And it forms the core of what she believes needs to happen in aged care homes around the country.

“It seems to me that the very best institutions make sure that residents get their regular showers, and regular meals, and their activities like someone playing them the piano, or bingo. But there is nothing that is treating them like individuals and that stimulates the brain.

“It will not cost the world to introduce a system whereby creativity is part of the program. But it has to be done properly.”

If one thing’s for sure, it’s that Dr Webb will be doing her part.

She has enjoyed this recent run of celebrations – her 90th birthday in June, her PhD conferred in August – but now she’s turning her mind to the tasks ahead.

There’s a chapter she’s been asked to write for an upcoming book about action research, and her supervisor at the University, Associate Professor Rosemary Callingham, has suggested she rework her thesis for publication.

And then there are the politicians to lobby, the ageism to challenge.