How do scientists keep an eye on reefs around the world? An innovative project and a team of dedicated divers

When scientists, marine management agencies and recreational divers got together to discuss how to keep an eye on life underwater, an innovative solution was reached.

Reef Life Survey (RLS) is a program that enlists scuba divers from around the world to record the marine life they encounter on their dives in a quantitative, standardised manner. The information is then passed on to scientists, providing a valuable snapshot of what’s going on underwater.

Marine life covered includes fishes, invertebrates such as lobsters, abalone and sea urchins, kelp, coral - and pretty much anything that divers come across on their trips under the waves.

The RLS is the invention of Professor Graham Edgar and Dr Rick Stuart-Smith from the University’s Institute for Marine and Antarctic Studies (IMAS). Since its inception eight years ago, the program has grown exponentially.

Dr Stuart-Smith, a University of Tasmania alumnus, said RLS now has teams of divers scattered around the world, and has collected data from more than 40 countries.

RLS has amassed an extensive global database documenting the abundances and identities of all the fish species and large mobile invertebrate species on rocky and coral reefs. There’s been more than 8000 surveys done around the world, including some in the Arctic Circle and even a few from Antarctica now.

“Being able to put hard numbers on what is underwater at the moment is the biggest objective, and hopefully being able to follow this through time."

Dr Stuart-Smith said the citizen scientists contributing to the RLS are people who are already experienced divers and take a great interest in the marine life they see when diving. Many already have photographic collections of the species they see on their dives. The Reef Life Survey enlists passionate divers to provide data from under the oceans, in Australia and around the world. Image: Dr Rick Stuart-Smith.

They are underwater naturalists. They’re real enthusiasts, like the birdwatchers on the land. RLS gives them a means to make their dives and records contribute to something huge – and with more diverse applications than we originally envisaged.

A snapshot of life underwater

As RLS grew larger, Dr Stuart-Smith and Professor Edgar founded the Reef Life Survey Foundation, a registered Australian environmental organisation. RLS has an ongoing partnership with IMAS, which manages the database and portal, making the RLS data publically available. Dr Stuart-Smith, Professor Edgar and their team also use the RLS data in their day jobs as marine scientists, providing some scientific interpretation and outputs associated with the Marine Biodiversity Hub, funded by the Australian Government's National Environmental Science Programme.

“RLS was originally funded by the Australian Government as a pilot project - to see if we could establish a cost-effective national monitoring network for rocky and coral reefs. The pilot project exceeded all our expectations and RLS has continued to grow.

“We just provided some information from monitoring locations for the State of the Environment report, which is due out later this year, and RLS is also forming an important part of understanding the state of the shallow water biodiversity in the newly established Commonwealth Marine Reserve network.

A lot of these reserves are a long way off-shore, and expensive and logistically difficult to monitor. For the shallow areas where divers can undertake surveys, RLS is proving invaluable to discover and document the species and communities in a number of reefs in these reserves that have never been surveyed before.

“The data and images of marine life and habitats in these reserves are helpful for the Australian Government, not just in terms of giving a benchmark for assessing whether the goals of their management plans are being achieved, following future surveys, but also in terms of being able to show the Australian public some of the underwater natural heritage that the reserve systems protect.

“At the same time, it is really good for RLS divers to see they are contributing useful and meaningful data that helps towards effective management."

With so many divers and so much data being collected regularly, the RLS yields “tonnes of observations.”

Dr Stuart-Smith said some of the most important findings relate to Marine Protected Areas (MPAs).

The data show that many of the marine reserves that have been surveyed around the world are not being as effective as they should be, because they are either not being enforced or they have been poorly located or managed. But we are also able to identify the ones that are working well. 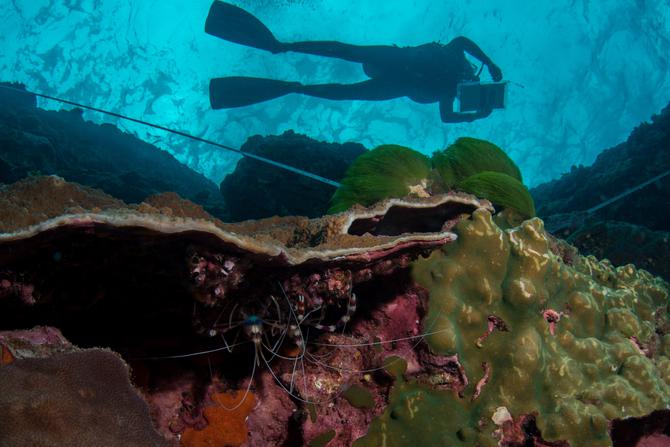 The citizen scientists involved in RLS collect data on their usual dives, and also help out with specific projects when needed.

Professor Edgar’s 2014 paper Global conservation outcomes depend on marine protected areas with five key features in Nature has generated the most scientific and management interest from the scientific outputs from RLS so far. The paper is the most cited marine conservation paper of the last three years.

“Not only is the research heavily cited by the scientific community, a lot of NGOs have paid attention, leading to them using this information to inform global MPA policies.

“RLS is all about objective collection of data – putting numbers on what is out there. It is then up to scientists and other data users how they apply such data. It is certainly encouraging to see some of the larger conservation advocacy groups using information that we know to be reliable,  as it can sometimes be counter-productive when well-meaning lobby groups don’t have a defensible basis for their claims.

“Even if we stopped doing surveys now, there would be a permanent record of what was under the water at this point in time. In 100 years someone could consult that permanent record. It could almost be like a fossil record, but far more detailed – and of course only for a very brief moment in the earth’s time, albeit an important moment."

Dr Stuart-Smith said the RLS team is now developing an online guide to reef species around the world.

Interested in diving into research? Apply now to become a research student.

We all put in a lot of effort. Everyone has been really happy with what’s happening, and it is very rewarding.