Science undergraduate Rhiannan had an amazing learning experience aboard a real research voyage.

Rhiannan Mundana wants to be a researcher one day, and she’s already contributed to a real research voyage.

Rhiannon is studying a Bachelor of Science double majoring in Geology and Spatial Sciences.

“I was studying a Marine Geosciences unit and Dr Rebecca Carey delivered lectures on submarine volcanology, which was really interesting.”

Rhiannan was keen to see if there were any projects she could delve into over her summer break, and Dr Carey suggested the Dean’s Summer Research Scholarship.

It was right up her alley, and with Dr Carey as her supervisor, Rhiannan investigated samples from a submarine volcano. Then an email gave her an amazing opportunity.

“There was a spot available on a research voyage, and Dr Carey asked if I would like to go. Definitely!

“I had the same responsibilities as everyone else on board. It was a really nice experience to feel part of a science team.

“We would get the dredges collected off the sea floor, that’s like a big metal bag of rocks, and wash them, sort them and catalogue them.

“There were scientists from all over the world coming together and working. It was great talking to everyone else on board. 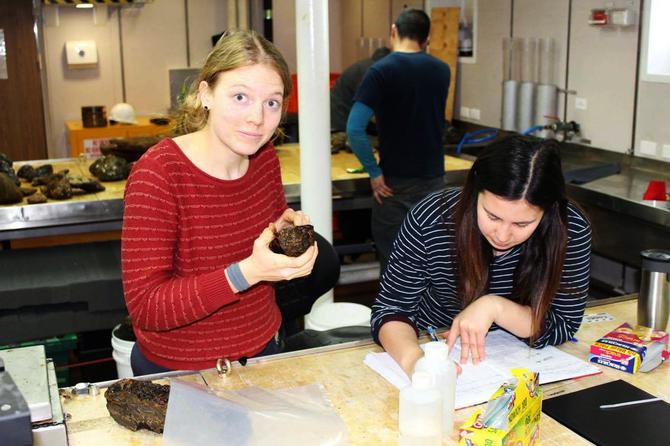 Rhiannan investigating the rocks collected on the research voyage.

“It really gave me the chance to see whether this was something I’d want to do in the future. And when I got off the ship, I thought ‘great, now when is the next time I get to go!’”

Rhiannan was awarded a second Dean’s Summer Research Scholarship this summer just past, and was able to continue her work from the first Scholarship and the voyage.

“That second scholarship was looking at the thin sections collected from the rocks and describing them. I was able to collect the data, have a look at it through the Summer Scholarship, and then that will lead into my Honours.

“It’s really nice to be able to do the whole sweep of collection, analysis and discussion.

“I’ll be trying to figure out ages and the timing of how the Cascade Seamount actually subsided.”

Rhiannan said some very unusual data had come from the location, which warrants more investigation.

“Data previously collected from two spots at the sea mount showed completely different histories. It’s really weird…and the voyage I was on was so the scientists could return and collect more samples.”

And it could have big implications.

“Knowing the history of this sea mount will give us timing of the breaking apart of Antarctica and Australia in the late stages of the Gondwana breakup.

“My Honours will contribute to a larger project with some geochemical analysis, doing some maps and looking at the samples, and trying to draw some conclusions from it.

“The experience of the voyage solidified what I wanted to do with my research and my Honours,” she said.

“I really want to be a researcher. There are so many new things to discover and that’s what really intrigues me.”

Make your own remarkable discoveries. Study Science at the University of Tasmania. Apply now.