Tracking the clast to the blast

Hunting volcanic matter across the oceans.

Did you know that when an underwater volcano erupts, the pumice clasts it creates travel huge distances floating on the oceans, shedding mass as they go?

“The pumice formed by volcanic eruption can form floating rafts of pumice clasts; these rafts can be metres thick. They move with the ocean currents and winds and disperse over entire oceans. These pumice clasts also become hosts for life that grows on them, such as algae, corals and barnacles.”

Pumice clasts drift thousands of kilometres on the surface of the oceans, but some of them sink because they slowly waterlog; they act a bit like kitchen sponges. This in turns acts as a very efficient way to disperse pumice over enormous areas on the seafloor.

What is a pumice clast?

Dr Jutzeler participated to a six-week voyage north of New Zealand, aboard a German vessel, the R/V Sonne. He scooped up a lot of pumice clasts from the seafloor, and he suspects they are from a huge submarine eruption that occurred in 2012 at the Havre Seamount Volcano. This deep submarine eruption produced a 400 km2 pumice raft in one day.

In a previous study, Dr Jutzeler calculated that in just three months, this raft was dispersed over an area that is more than twice the area of the UK. These same pumice clasts beached in Tasmania two years after their eruption.

“Pumice rafts drift thousands of kilometres, and they randomly drop pumice clasts to the seafloor. What we found on the sea floor was a lot of rounded pumice clasts, which is a bit surprising: when erupted, most pumice clasts will have sharp angles, due to their fragmentation by the volcanic activity. It is being part of a pumice raft that produce rounded clasts: they are abraded onto each other by wave action, like in a washing machine.

“The rounded pumice clasts collected on the seafloor should be accompanied by the tiny particles produced by abrasion. I am going to study the recovered sediment and evaluate how much volcanic particles are present, and if they belong to the same eruption.” 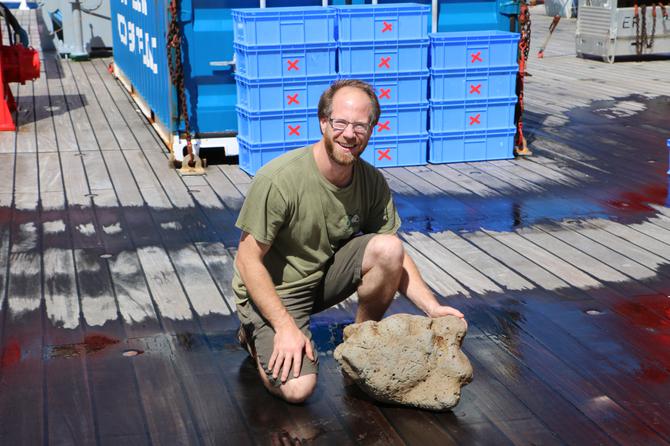 I’d like to know the extent of where those fine particles go, because it can foster life, or it can kill life. For plankton, the particles should have a positive impact, as they release nutrients. But if there is too much blanketing on the sea floor, it is detrimental to the organisms living there.

So how do you find out where your pumice has actually come from?

Dr Jutzeler uses geochemistry to track the pumice clasts back to an eruption.

“We look mostly at volcanic glass. The molten magma cools very fast in contact with water, and creates pumice clasts that are mostly made of silica glass. That’s the best material to use for this chemical fingerprinting.”

We then try to compare the chemistry of our particles with the analyses we have of other volcanoes, to try and understand where they are from.

“I am very interested to know where the pumice clasts from the Havre eruption travelled, and if we can compare our sampling with the satellite maps that show dispersal of the pumice rafts.”

The other part of the research looks at abrasion.

“I’ve been doing some experiments in a wave tank. I create an artificial pumice raft, add some waves, and see how quickly pumice can abrade.”

“Then I analyse how the shape of the pumice clasts has changed. They starts out angular and then after a few hours they are rounded.”

“To create that rounded shape, you need to lose about 30-40 per cent of the material. That means more than a third of the mass is gone and will settle in the ocean as tiny particles. That’s a lot, and it gives us an idea of the impact these pumice rafts have on the seafloor.”

And Dr Jutzeler can’t wait for the next discovery.

Everything about underwater volcanoes is thrilling and weird, and we know very little about them. It’s exciting. On the ship, every time we get samples coming up, it’s like Christmas. What will we get?

Interested in making your own discoveries? Apply now to become a research student.
Still wondering where to begin?