Tour Down Under provides unique ‘classroom’ for health science student

Learning on the job.

Share this
Related articles
A recent opportunity to work on the Santos Women’s Down Under Tour gave University of Tasmania student Corey Somerville the chance to gain some unique work experience.

A second year School of Health Sciences student, Mr Somerville was selected to assist on the prestigious cycling event held recently in Adelaide, thanks to a new partnership between the University and the Tasmanian Institute of Sport (TIS) women’s cycling team.

It was a tremendous opportunity which enabled me not only to network, but to improve my skills from an exercise science perspective and deal with a whole range of different people from different backgrounds. 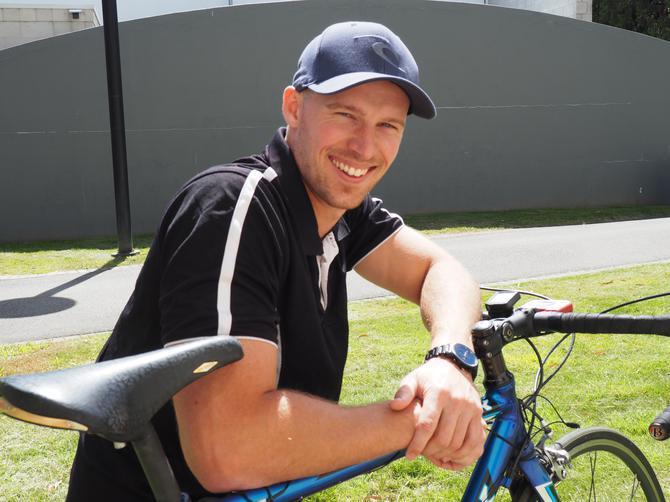 “It was a great way of putting my studies into action and gave me a little taste of what to expect in the field.”

A mature age student, Mr Somerville returned to University study after several years in the workforce.

He will graduate next year with a degree in Exercise Science and is looking to pursue a career in physiotherapy.

As a mature-age student, Mr Somerville said he had returned to University very driven and passionate about what he wanted to do.

And the chance to work on the Tour Down Under had strengthened his excitement about his career field.

Learning ‘on his feet’ during the tour, Mr Somerville was involved in many aspects of the race from bike and race preparation to hydration and recovery assistance.

Mr Somerville said volunteering on the Women’s Tour Down Under was also a chance to be part of something very special.

“The women’s team had a fantastic outcome and exceeded all their expectations at the 2017 Santos Women’s Tour Down Under,” he said.

“For some of them, it was their first team event so there was a lot of rapport and team building.

“Being able to be a part of that too and watch them grow, was amazing.”

Mr Somerville said he hoped to take part in any other similar opportunities that might arise and recommended it to other students.

"This opportunity has been fantastic and I would definitely recommend it to any student,” he said.

Don’t rule out anything or think you can’t do it- look at me I’m 27 and I took the leap to come back to uni and all these opportunities have come my way.

Interested in following in Corey Somerville's footstep and study for a degree in Exercise Science?

Get all the information you need to study health science.